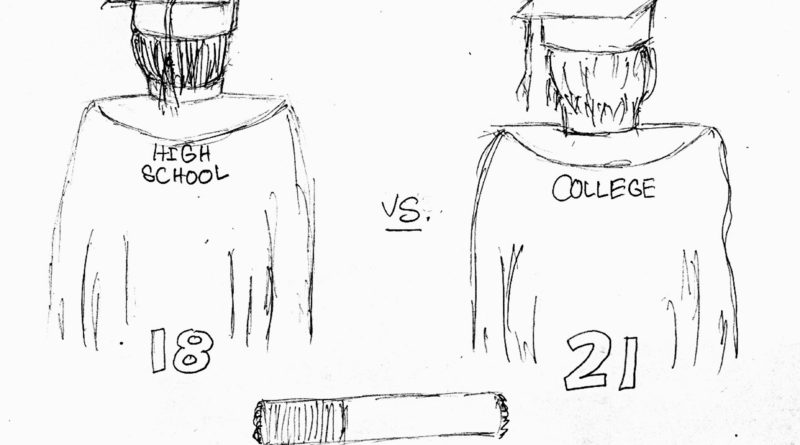 California Governor Jerry Brown signed legislation that will raise the age to buy tobacco from 18 to 21 with the exemption of military personnel. We at the Olympian believe the law passed will be beneficial to all the students at CVHS.

This bill is backed by medical groups like the American Heart Association and deemed to be one of the “most expansive effort” to control tobacco use in California in more than a decade.

Several statistics were presented to legitimize the need for government action against the rising threat of early tobacco use. The Center for Tobacco Control Research and Education at UC San Francisco has stated that adolescents are at particular risk for nicotine addictions as their brains develop. The National Survey on Drug Use and Health has shown that 90 percent of tobacco users started before the age of 21, and 80 percent first tried tobacco before 18.

We at the Olympian find the information, research, and statistics presented too logical to argue with. Smoking’s harmful results on our growing bodies and brain are too disastrous to be ignored and must be addressed. If that means taking legal action, then so be it.

With this bill implemented in California as of June 9, several organizations have estimated its positive impact on current and future high school students. A 2015 study by the Institute of Medicine estimated that it will result in 200,000 fewer premature deaths for those born from 2000 to 2019. The Prevention Institute of Oakland predicts teens aged 15-17 will benefit most from this legislation.

Many smokers under 18 obtain their cigarettes and tobacco products through friends who were able to legally buy these products. Once the bill is enacted, teen smokers will no longer have that connection, and future generations will be less susceptible to smoking.

The bill will also apply to e-cigarettes, which have been legally categorized as tobacco products. E-cigarettes, often labelled as an alternative to smoking, have become more popular with young people. Studies have shown that those who vape will most likely get addicted to smoking cigarettes.

The Olympian believes this bill will also help stop the tobacco industry from making more than $35 billion annually at the expense of their consumers’ lives, thousands coming from teens. We think that 18 is a questionable age to be deemed an adult. At that age, most people are still in school, supported by their guardians, and nowhere near being able to provide for themselves, let alone keep up with the smoking or vaping lifestyle.

We hope that this law will further deter teenagers from instigating a life of tobacco and nicotine addiction.