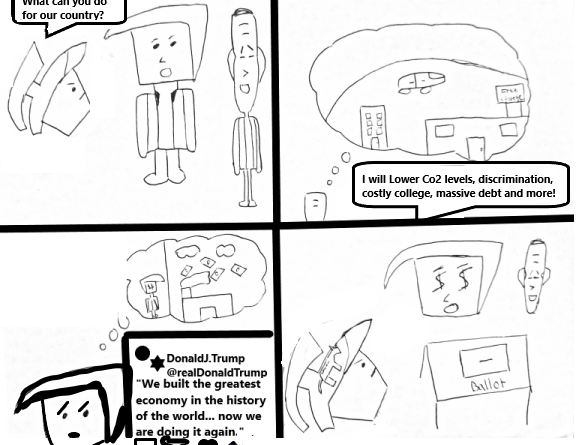 Citizens will chose to vote for President Donald Trump or former Vice President Joe Biden in the 2020 presidential election on Nov. 3. For a number of reasons, The Olympian supports Democratic candidate Joe Biden.

Unlike Trump, Biden looks to protect civil rights. Trump has made it illegal for transgender people to join the military. We believe everyone regardless of race, gender, or sexual should have their rights protected, and should be treated as equals.

Biden also wants free community college for all, and affordable public colleges. As future college students, this is very important to us. About 70 percent of college students graduate with student debt.

Biden also looks to create affordable health care, but Trump supports privatized health care. Universal health care benefits everyone. It costs much less, which means more people have access to health care. Better access allows more of the U.S. to be healthier as a whole and helps prevent the spread of infectious diseases.

Another huge issue is climate change. We realize it has serious consequences on our environment and our futures. Biden believes in climate change and plans to stop it through investing in renewable energy such as a wind and solar power. He also wants to prevent further damage to our environment by enforcing environmental regulations, and protecting our natural resources. Trump on the other hand has denied the severity of climate change. Trump has continued to support nonrenewable energy industries like coal, and is he only president ever to take away more protected lands than he added to them.

Lastly, Biden supports online school during the pandemic, while Trump wants to reopen schools while it isn’t safe. Biden has a plan to get rid of COVID-19, but Trump believes “it will just go away” and has no plan. If we open schools now the pandemic will worsen and many more people will die.

Although there are many more reasons why The Olympian supports Biden, those are just a few main ones.

We oppose Prop. 15 which would raise property taxes on large businesses to support schools and other government programs.

The Olympian believes we should find another way to support public education .

One of the many propositions included on the 2020 ballot is Prop. 16 which will decide whether or not to restore affirmative action. We support Prop. 16, which gives low-income students a chance to attend higher education. It also breaks the socioeconomic cycle by promoting equity. Affirmative action allows for under-represented people to have more opportunities.

Passing Prop. 16 will create diversity in the workplace, which benefits everyone. Affirmative action levels out the playing field when people are applying for schools, jobs, and more which is why The Olympian supports Prop. 16.

During this upcoming November election, citizens will be voting on several propositions including Prop. 18 allowing 17-year-olds to vote.

We support Prop. 18. Most high school students want to vote, and during these last few years students have become more involved in politics. Many already work and get taxed but don’t get to vote, meaning they are being taxed without representation.

Adults don’t realize how involved students actually are for their future. The Olympian believes that allowing 17-year-olds to vote would result in more representation that is needed among young people in California and the United States.