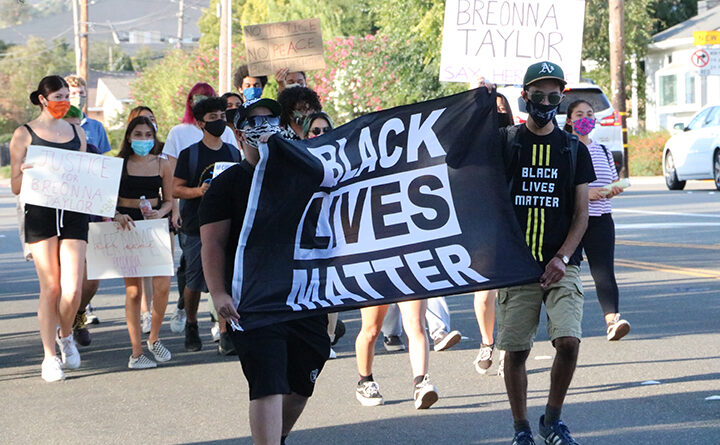 Students and others protested the Louisville Kentucky police killing of Breonna Taylor by marching through Castro Valley on Sept. 27.

The crowd walked down Redwood Road and Castro Valley Boulevard. The march ended at the Adobe Park where there was a memorial for Taylor and people spoke about police brutality and racial discrimination.

Taylor was a 26 year old African American medical worker. During a botched warrant search of her apartment, police officers shot her eight times. Taylor’s death sparked outrage and hundreds of protests across the United States. These protests are a part of the Black Lives Matter Movement.

Protestors carried a Black Lives Matter banner and signs with Taylor’s name. They chanted, “Say her name.. Breonna Taylor!” and other slogans.

The protest remained fairly peaceful, however the group did confront sheriff’s officers in cars who were following the marchers. Some people knelt on the ground while others put their fists up. A few protesters got close to the officers saying, “Don’t shoot.” Eventually the officers left and the protesters kept marching.

At Adobe Park, people lit candles and brought other ideas to create a memorial for Taylor. A few people also spoke about the Black Lives Matter movement.

“I’m pretty sure this one had the lowest turnout of the Castro Valley Black Lives Matter events but it also seemed like everyone that was there were super passionate,” said CVHS junior Ethan Hudson. “I went because of the consistent systemic injustices towards BIPOC (Black, indigenous and people of color) and an obvious descent towards fascism that our country is going down.”