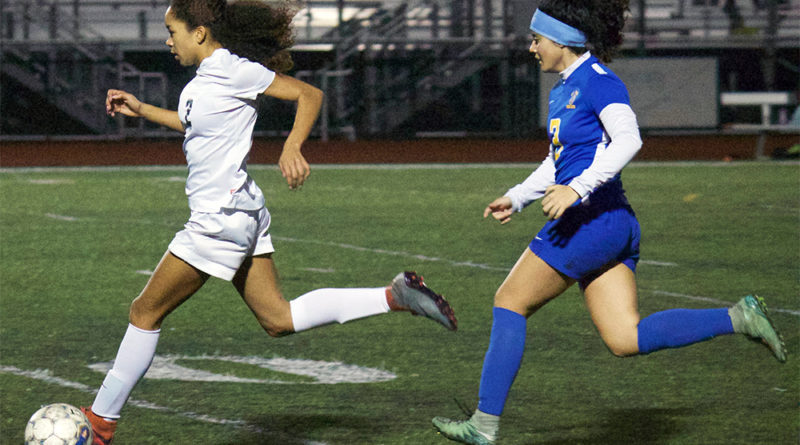 The entire girls varsity soccer team shuffles amidst unzipped backpacks and water bottles as they huddle together. No, they aren’t lined up to recite a cheer or run through a plan; some even wave their phones in anticipation, ready to film. Proud, toothy smiles are spread wide across their faces as they watch their teammate Myla Ogle respond to a question for an interview.

“I feel like we all really put in a big effort and we were really intense the whole time. We gave it our all and we had the outcome that we wanted,” said Ogle, a sophomore. A few endearing expressions are exchanged as the sweet moment comes to a close.

This adoring and familial-like bond certainly translated onto the field when the team played against the Mt. Eden Monarchs on Jan. 12. The Trojans won with a score of 6-0, with four goals scored in the first half and two in the second. Although the game was won by a wide margin, the second half wasn’t short of the excitement.

Audrey Vance stepped in to defend the goal as the Monarchs swarmed around, knocking the keeper off balance. Although a shot was made, Vance managed to block the ball from entering the goal.

The chemistry of this team is clear from the get go. These girls continuously encourage and support each other, both on and off the field. It’s also present in their previous streak of victories, which they hope to maintain in future games.