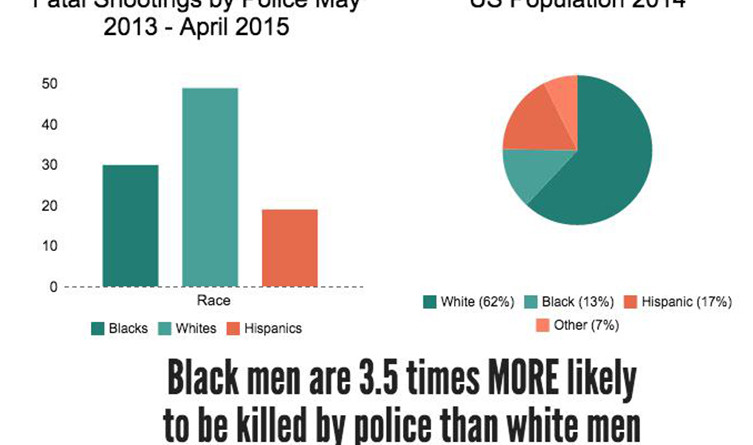 Living in a country where black men make up only six percent of the U.S. population, yet account for 40 percent of the unarmed men shot to death by police in 2015, is frightening.

Black Americans and many other minorities are still fighting for the rights and equality that they deserved hundreds of years ago. It is difficult to survive, let alone live in a country where the judicial, economic, and political system was built to break down and oppress people of color in a so-called justice system.

Proclaiming that black lives matter is not anti-all lives matter, it’s just that the lives of black people are often overlooked. Statistics detailing police shootings, unlawful arrests, and stop and frisk searches done by law enforcement to blacks are often hidden in the shadows. Yet, when a fed up mother, sister, aunt, or uncle speaks out against the murder of an innocent, unarmed black male who was shot and killed by a police officer (who is unlikely to be prosecuted) proclaims that “Black Lives Matter,”  it is suddenly a problem for the white community.

The proclamation that “Black Lives Matter” would not be an issue if these senseless and horrifying experiences weren’t happening to your family, friends, or anyone of your skin complexion. Lately, people cry out that “All Lives Matter” in the midst of the struggle of the black community which is constantly targeted and oppressed through the legal system. To those who challenge Black Lives Matter with All Lives Matter, I must say that you are inhumane.

It is understandable that it may be hard for non-blacks to empathize with the black community. I ask you to take a moment to remember that the black community is constantly suffering from the injustices and hardships that one must endure by simply being a black American.

Black Lives Matter is more than a simple statement, it is a modern day civil rights movement. Not only blacks, but people of all races are welcome to participate in and support the restoration of rights that blacks should have been given from the moment they were forcefully brought to America soil in 1619.

President Obama addressed the issue in a White House forum on criminal justice when he stated, “I think the reason that the organizers used the phrase ‘Black Lives Matter’ was not because they were suggesting nobody else’s lives matter. Rather, what they were suggesting was there is a specific problem that’s happening in the African American community that’s not happening in other communities.”