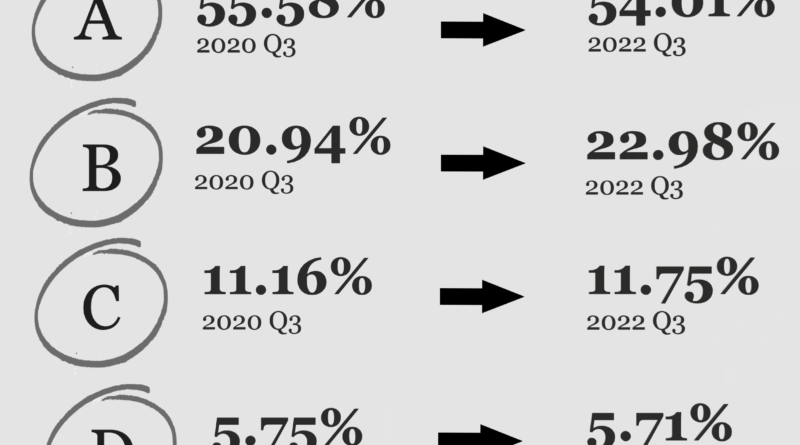 Graphic made by Andrew Hui.
Campus News Our Best Slider
May 16, 2022May 29, 2022 Corinne Davidson 24 Comments grades, standards based grading

The start of this school year brought along the use of standards-based grading in hopes of lowering the number of F grades among students. Standards-based grading aims to grade by quality and understanding of work instead of just completion. Some teachers made tests count for 90 percent or more of students’ grades, leaving homework and other assignments to barely make an impact.

Grades have changed since implementing standards-based grading, according to a comparison of third quarter grades in 2020 and 2022. The percentage of Fs has gone down 1.06 percent, from 6.58 percent to 5.52 percent. Also dropping were the number of As, from 55.58 to 54.01 percent.

After three-quarters of standards-based grading, students and staff still have mixed feelings. Students each have their own opinion on the grading method and not all teachers are on board with it, even so far into the year.

“I think standards-based grading is really excellent once the initial learning curve is overcome; some people are frustrated with it, which is understandable because it’s only being applied partially, but when it’s applied as a complete package it’s much better for students and teachers,” said English teacher Trenton Logan. “For teachers, it means grading less busy work and focusing on the things that really matter, and for students, it teaches them to take ownership over their own learning.”

Logan supports standards-based grading because he feels it prepares students better for college in the way that it prioritizes actual learning instead of receiving points. He notes that with standards-based grading, students are able to retake tests to improve their grades which promotes understanding of the material instead of just moving on and forgetting everything.

Economics teacher Eric Bahm expressed an opposing view. “I think we’re trying to do multiple things here as a school: I want the students to be more attentive readers, think about stuff, evaluate sources, build a good work ethic,” explains Bahm. “Particularly for a course like economics where it’s really conceptual, there isn’t one thing I’m looking for. There isn’t one way to really judge. I think the effort should help some.”

Students also are frustrated with the system of grading.

“It just makes homework pointless, meaning most people aren’t going to do it and it puts too much weight on tests. Yeah, you get infinite retakes but that doesn’t matter if you keep failing the test,” said senior Dakota Brown.

Another senior Faye Brown notes that there are teachers who will give a bunch of assignments, but because of standards-based grading, they don’t mean anything and just become a burden that doesn’t help students’ learning.

Bahm has had many students come to him complaining about standards-based grading, saying they understand that they can retake tests but don’t feel like it improves their understanding.

“You know you can retake the test so there isn’t much at stake the first time,” said Bahm. He feels that if students do poorly on a test they will just keep retaking until they reach the desired grade instead of studying and understanding the topic the first time around.

“It makes your grade harder to fix. Because your grade is impacted more by each assignment, if you do poorly on one assignment it will drop your grade significantly. So there is no incentive to do homework or study,” said senior Vincent Xiao.

A common complaint against standards-based grading is that it makes it harder to understand a topic because you don’t get the repetition that homework would normally provide.

“I understand the topic more with homework and stuff like that. I was always the person who didn’t have to study, I could just do the homework and get As and Bs on tests,” said Xiao.

“Something like this is just another quick fix—like Common Core—that seems like it’ll fix things but it just kind of makes it worse,” said Bahm.