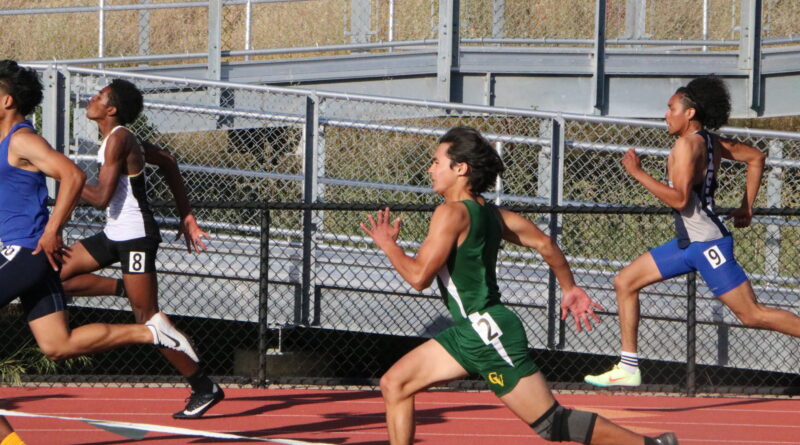 “Track is hard, but it’s fun to challenge yourself and push hard to get better,” said the newly found sophomore track star, Ayden Kovacs. This is only Kovacs’ first year on track, yet he has excelled in long jump, the 100 meter dash, and the 200 meter dash.

Head coach Dooney Jones has taken notice of this talent as well.

“Ayden is definitely an up-and-coming athlete for our future varsity team,” Jones said while recalling Kovacs’ successes so far in the season.

Kovacs said that while long jump is his favorite event, he likes the 100 meters because of how competitive the sprint is. He started off the season with a 15’7” foot long jump, and he is currently at 18’3”, midway through the season.

As for his 100, he began the season at a time of 12.94, and it is now currently at 12.41. For the 200 meter dash, he started with a time of 26.77 seconds, and at the most recent meet ran 25.29 seconds. He has improved tremendously and has gotten a personal record at every single meet this season, which is unusual for track athletes.

Kovacs has set multiple goals for himself that he works towards at practice every day. He wants to run under 12 seconds in the 100 meters and try to jump 19 or 20 feet in the long jump by the end of the season.

Prior to the track season, Kovacs mentioned that he would go to the gym every day after school for multiple hours, and that has been a big factor in his current success in track and field.

“I’ve met a lot of new people on the team and became good friends with them. I’ve become close with my 4×1 team as well,” said Kovacs.

The track star not only excels in his own individual events, but he is also an anchor on his teams’ frosh-soph 4×100 relay team. His team has raced the event together four times, and have won the race three out of four of those times. Their personal record is 48.68 seconds, having also gotten a personal record at every meet so far.

The sophomore star has stunned many people in his first season on track, and will continue to do so for multiple seasons to come.

One thought on “Sophomore Kovacs is an all-around track star”