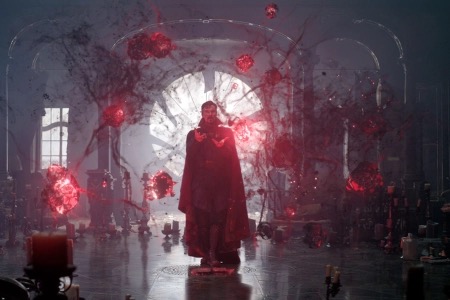 Marvel’s “Doctor Strange in the Multiverse of Madness” is most certainly mad. A kaleidoscope of mind-twisting scenes brings into play impossible architecture, a universe entirely made of paint, a battle with the notes of Beethoven’s “Symphony No. 5,” and much more. The horror-tinged sequel to “Doctor Strange” has audiences on the edge of their seats as Strange tumbles deeper and deeper into the multiverse.

The movie doesn’t waste any time getting into action; the beginning sequence involves a ponytail-sporting Strange magically battling a monster in a space-like landscape. An unfamiliar new character, America Chavez, is by his side. Within the first few minutes, the monster has fatally speared Strange through the chest. America escapes through a mysterious star-shaped portal, and then the scene changes—Strange is very much alive again, minus the ponytail, on a nice day in New York City, thinking, What a terrible dream.

“Every night I dream the same dream,” Strange says darkly, “and then the nightmare begins.”

“Doctor Strange in the Multiverse of Madness” debuted on May 6 and grossed an impressive $450 million at box offices globally on its first weekend. Back by popular demand is Wanda Maximoff, also known as Scarlet Witch. The movie is just as much hers as it is Strange’s, and they share the screen equally as they spiral through the multiverse. Wanda is just as powerful as ever, but this time, a different side of her is out to play.

“You break the rules and become a hero,” she tells Strange when he shows up at her idyllic isolated cottage looking for help. “I do it, I become the enemy. That doesn’t seem fair.”

The most striking thing about the movie is its scare factor; interwoven with the classic Strange spells are elements of horror atypical for Marvel movies. Director Sam Raimi, known for his “Evil Dead” horror trilogy, is one of the few Marvel directors to have his true style show through in superhero action. He pushes the boundaries of the PG-13 rating with gory fight sequences and the occasional jump scare—including a zombified Strange—but overall, the movie remains appropriate for older children.

Despite its chilling first impression, “Multiverse of Madness” also tackles some melancholy themes. Strange, Wanda, and America all deal with loss. Similar to Marvel’s most recent miniseries “Moon Knight,” the movie conveys the message that in order to heal from trauma and grief, you have to look deep inside yourself. To fully understand Wanda’s character arc, which is undoubtedly the most explored out of the three, viewers should prepare by watching the “WandaVision” show on Disney+, which serves as a heartbreaking yet ominous prologue to “Multiverse of Madness.”

Altogether, the movie’s psychedelic effects and Disney-defying action sequences, combined with a mind-bending score by Danny Eflman, pull together to create a unique Marvel adventure. The audience’s safety blanket is torn off as the movie presents shocking surprises, sending the audience into a whole new universe of Strange.

9 thoughts on “A whole new level of Strange”