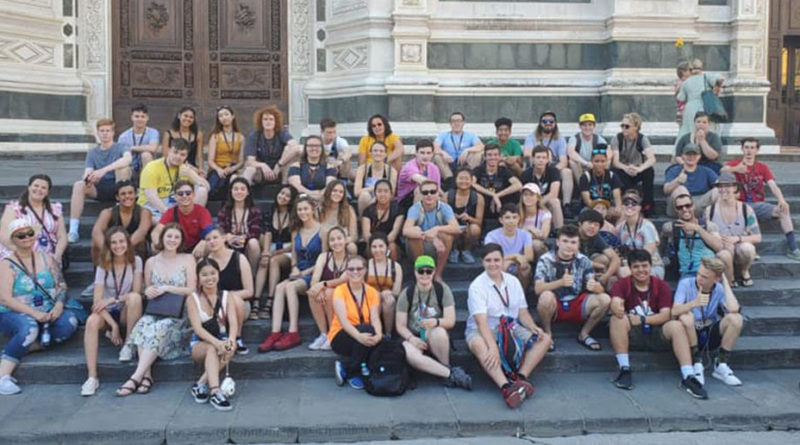 A group of CVHS students taking German or Spanish went on a trip to Germany, Austria, Italy, and Spain this summer with German teacher Barbara Andersen and Spanish teacher Candice Tigerman. The 47 students traveled to Hamburg, Rome, and Barcelona, among other places over two weeks in June and July.
Students resoundingly enjoyed the trip, which was not school-sponsored but set up independently by Andersen and Tigerman for the benefit of the students, as well as their enjoyment.
Andersen, who has run similar trips in the past, led the organization of the first trip since she gave birth to her daughter. Though her trips have historically been focused on Germany and German-speaking countries, the addition of Tigerman and some of her Spanish students allowed for the trip to extend to Florence, Rome, and Barcelona.
One student who had not previously visited Europe appreciated the variety that the trip offered. “Getting to see historical monuments and the tons of art in every country was incredibly interesting, as were the small cultural differences,” said senior Maria Arechiga.
Nolan Thompson, who had visited some of the cities before on his own, said his favorite parts of the trip were “exploring Munich and then playing soccer next to a huge cornfield at sunset.”
Altogether the students went to Hamburg, Andersen’s hometown, Rothenburg (a small medieval city home to old buildings and a quaint charm), Munich, Salzburg, Florence, Rome, and Barcelona, and the things they did there are too numerous to name.
Not just fun and games, though, the trip allowed students to practice those language skills they had cultivated over the years. “Barcelona was a really cool city with all the tasty foods and quality ham, and especially the Gaudi architecture and whatnot,” senior and Spanish student Dylan Brown said. “Using Spanish felt weird but I enjoyed it; I felt like those four years of Spanish weren’t for nothing.”
German student and senior Din Didić agreed, saying “the trip helped my German improve and speaking to locals was a great experience.”
All the students made a point of commenting that they truly enjoyed the vacation, and many said they would do it again. Didić mirrored the feelings of a majority of the group when he said thusly: “it was the best two weeks of my life.” And there is no better way to put a feeling than that.