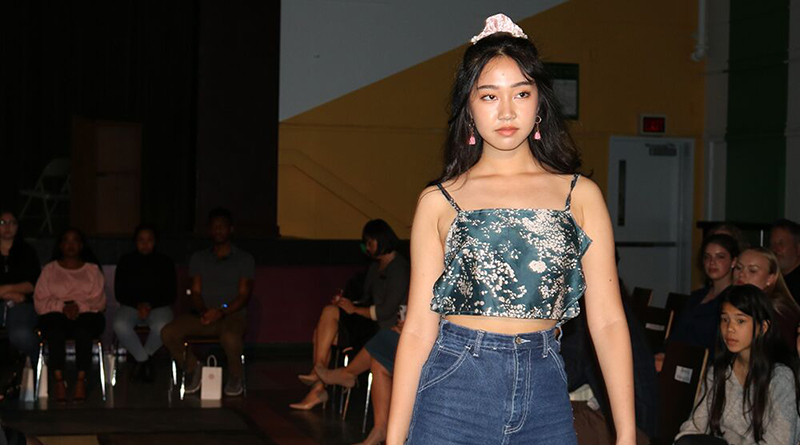 DECA held its second annual fashion show, “Empower,” to raise funds for its upcoming conferences on March 30. The show featured student made designs, past alumni of the Fashion Institute of Design and Merchandising, and spokespeople of Nordstrom from Pleasanton.

Three student designed brands were displayed during the show: Mayu Luck, Slouchszn and Ashley’s Designs. Each designer designed around five pieces and had friends model on the runway. There were many extravagant works including masks, recycled clothing, and tops.

“I was super excited to share my work with everyone. All those late nights of sewing and pulling pieces together was very worth it at the end,” said the creator of Mayu Luck, junior Amaya Villahermosa.

“The whole point of Slouchszn and why Terike created it was to build a community and for us two to bring that vision in and portray it within fashion,” said co-creator and junior Adhila Bukhari. They most certainly did build a community as their designs were cheered for by the audience.

“I had experienced something that I had not experienced before,” said model junior Carli Santiago. Each model was featured a couple times with a variety of pieces. It provided an eye-opening experience into what the modeling life was like for those individuals.

“It’s a really accomplishing feeling being able to see your vision come together the way you wanted to,” said co-creator of Slouchszn and senior Terike Dunn. The brand showed a wide variety of designs one including a man with a mask on denim jacket and blue jeans with white writing on them.

Two individuals from Nordstrom in Pleasanton came to speak to the guests about individualism and what Nordstrom is doing to promote individualism. They launched a brand called Good American promoted by Khloe Kardashian that ranges from size zero to twenty four to show that they acknowledge not all of their customers are a size zero or 12 but that they range in sizes. The show’s whole theme was empowerment and Nordstrom helped to enforce that by promoting their size inclusive brands.

Teachers from CVHS including English teacher Michael Langella and Spanish teacher Laurel Orduña also strutted down the runway and the students had them wear outfits that made them the most confident. Langella wore a grey suit and tie and Orduña modeled a red blouse with a gold tassel skirt. It was truly empowering to show that even the adults at our school can feel confident as well.

The event also featured a “promposal” by senior Andrew Salas to junior Nadia Jamal. He came down the runway in a black and green tuxedo and stopped the music to ask the lucky girl a question. She of course said yes and they locked hands and walked off the runway together, it was a picture perfect moment.

With all these highlights the show was magnificent. Where else can you go to watch stuents empower others in a safe place besides the fashion show. Seeing students coming together to create a name from themselves was incredible.