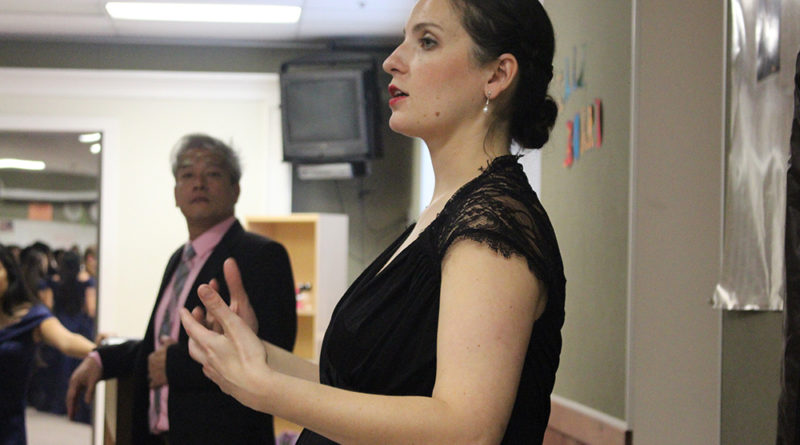 Laryssa Sadoway, the choir teacher at CVHS, has had quite the journey to get to where she is now. She started singing in third grade choir and continued into high school, where she was able to take an honors choir trip to New York.

After high school, she began consistently performing with the San Francisco Cabaret Opera Company and the Berkeley Opera Company. However, after a period of performing, she decided that things were too serious, and that she wasn’t having as much fun as she used to, leading her to start teaching.

“I started thinking what can I do? Then I thought, well I have this master’s degree so maybe I can go teach, but then I found out that you need a credential to teach. To get the credential you had to volunteer at a school first and then apply to the credential program. I figured I should just start the volunteer hours and see if this is something that I want to do. So I got signed up, got fingerprinted, and I went and volunteered at Floris Van Middle School in San Francisco. After the first day it was like a big lightbulb going off for me. It was the most fun I’d had in years! I loved it. I loved singing with the students, I loved how much they loved the music. I realized I had so much to say and so much to give in that capacity, and I loved that it was collaborative,” said Sadoway enthusiastically.

After the initial spark of inspiration, Sadoway continued her education towards a teaching pathway in the Bay Area.

“It was the volunteering that really kicked me into gear and it was good because although the credential program was stressful, the reward was that I’d get to teach after. From there I went to Cal State East Bay, and I started student teaching and was placed in Mount Eden in the beginning of the summer, and then at Canyon in the spring, so I had a taste of Hayward and Castro Valley,” she explained.

After gaining some experience as a teacher, Sadoway was given an enormous opportunity.

“After a year I got my credential. Two years later Ms. Suesoff, after 32 years at CVHS, retired. So when I applied for the job, one of the things that was so cool was that I was applying [for a position] formerly occupied by a woman who built this huge program here, and no one knew who was going to take over… the students loved her and there was such a community. I was interviewing for a job where the freshmen and sophomores were my former seventh and eighth grade students from Canyon. So when I came and got hired, even though there were 200 people in the program, for those nervous freshman and sophomores on the first day of school, a lot of them already knew me. This is my fifth year here now and it’s home,” she said.