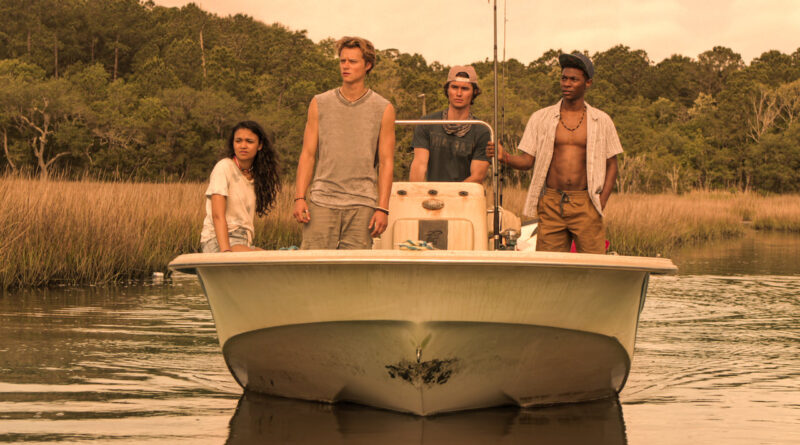 Netflix is back at it again with another binge-worthy teen show full of adventure, angst, and snark. “Outer Banks” premiered on Netflix in April, mixing aspects of “The Goonies” with sun-kissed summer vibes and teen cliches.

The story follows a kid named John B and his friends living in North Carolina’s Outer Banks as they search for the secrets behind his father’s disappearance, as well as for a hidden treasure. The kids, nicknamed the Pogues, spend their days zooming around the island on a boat, causing fights with the rich vacationers and having no true responsibilities, and of course, bringing trouble. Shipwrecks, romance, storms, and many misadventures follow the Pogues throughout all ten episodes. The storyline is predictable, but the cliff-hangers and beachy vibes rope in viewers.

I watched “Outer Banks” when it first appeared on Netflix because I was stuck in the initial slump of quarantine when no one knew what to do with themselves, and I didn’t want to  bake sourdough bread so I gave the show a try. The mood it created was very lighthearted, and I enjoyed the treasure hunt aspect. However, I felt the characters were very two-dimensional, likeable but not creatively written. Every adult was villainized as well. Overall, the show was entertaining, but its cliches were overwhelming at times.

“Outer Banks” was well-received by Netflix viewers, and it rocketed to the #1 spot on the most-viewed list within days of its release. It was given generally favorable reviews by critics, described as being over-the-top but balanced out with a good sense of adventure. Thanks to the show’s positive response, it has been approved by Netflix for a second season, and filming has restarted in South Carolina.

John B says, “[The Pogues’] mission this summer is to have a good time, all the time,” and while that goal is completely unrealistic for the quarantined world, “Outer Banks” is fun and helps to reinstate that summer feeling.