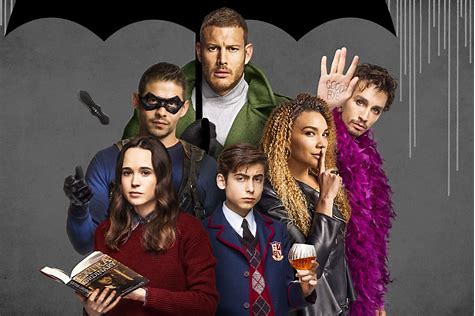 In “The Umbrella Academy,” the Hargreeves siblings all gather to protect Harlan from the Handler thinking they are only going against the Handler and her daughter when an entire army of people show up with guns pointing at the siblings. Diego asks Five what they should do and he states “ well we got two choices, fight and die now or run and die later.” The scene then cuts to all the siblings frantically running from this army.

Throughout the series small comedic moments like this are placed which helps the viewer relate and laugh, these moments are what makes this show so enjoyable. A similar moment happened in season one where Klaus was dancing around the house with headphones, not hearing his family frantically trying to escape the people hunting them down.

The show itself is about a dysfunctional family with superpowers when they were all kinds one of the brothers Five gets stuck in the future where he sees that the world was destroyed and when he comes back to the present he tells his siblings that the world is going to end in only a few days. The siblings begin working to find the cause of the end of the world only to find out too late that their sister Vanya, who seems to have no powers is what causes it.

In order to save his family Five brings them into a different time where they all get separated and have to find each other before the world ends again. The siblings look for each other all getting stuck dealing with their own issues along the way. Five is being hunted by the time police trying to fix the timeline, Klaus is running a cult with ben his ghost brother, Vanya loses her memory and is trying to remember who she is, Diego is trying to prevent JFK’s assassination, Allison is dealing with being a black woman in the 60’s, and Luther is still trying to find his place in the world. The big question is will they be able to find the cause and prevent the end of the world or is the end of the world simply inevitable.