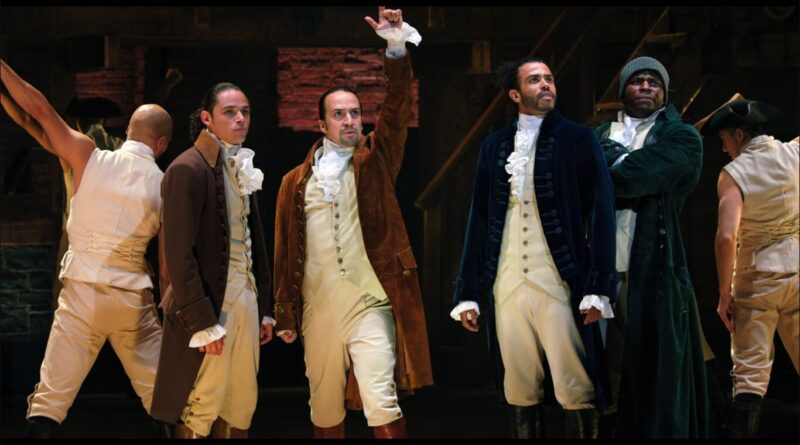 A compelling song buoys the audience within the first ten minutes. “My Shot” lifts the audience with its hip-pop and catchy lyrics. Inspiring and informational, the song is one that stands out from the musical. It makes everyone want to “Rise up” (Lin-Manuel Miranda) and take their shots, so no opportunity can slip by.

Originally a Broadway musical, “Hamilton” the movie is motivational, educational, and memorable. Brought into people’s homes through Disney+, the film gives families a glimpse into the magic of Broadway. It has brought many people to tears with the heart-wrenching story of Alexander Hamilton and the music draws the audience in to listen to the very intricate details set within the raps and beats. The dancing is also extraordinary and is complemented by the set and stage.

The founding father is aptly displayed throughout the musical, as well as the main political figures throughout the founding of America especially Aaron Burr, George Washington, Marquis de Lafayette, James Maddison, Thomas Jefferson, and King George III. An important part of American history is shown through the life of Alexander Hamilton. His fighting in the Revolutionary War and the founding of the Constitution are key pieces in the show.

Another large part of the show is given to Eliza Schyler, the wife of Hamilton. Her story is woven into the musical as well as her perspectives and feelings. Her sisters also make many appearances and play large roles in Hamilton’s life.

“Hamilton” is the brilliant work of Lin-Manuel Miranda. Inspired by Ron Chernow’s biography “Alexander Hamilton,” the musical weaves together the history of the founding of America, specifically Hamilton’s story, in a Broadway musical that is unique and has blown many people away with its combination of R&B, hip-pop, and jazz. It is both historical, touching, and comedic in an astonishing way.

Filmed in 2016, “Hamilton” launched in June 2020 on Disney+ to the pleasure of people all over the world, especially “Hamilton” fans. It is rated PG-13 and a wonderful movie to watch with friends and family.

Anyone who watches “Hamilton” will not regret it. The music will be bouncing around in their head hours after watching the movie.

Inspiring in more ways than one, “Hamilton” is an unforgettable musical turned film.

One thought on “Inspiring history retold through theatre”