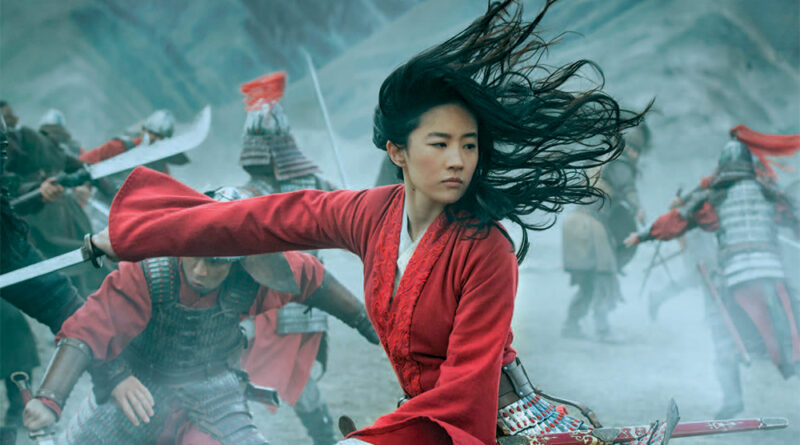 During the sparring sessions with the Imperial Army, Mulan, played by Yifei Liu, and Chen Honghui, played by Yoson An, get into a rather intense match. The rest of the Imperial Army gathers around the two characters sparring. Just when Chen Honghui started to get an advantage in the match, Mulan used her qi (used in this film as a magical power that some people are born with) to defeat Chen Honghui. The intense sparring scene is ended by jokes being told by the other soldiers.

This scene shows the flaws that Niki Caro’s remake of “Mulan” has, starting with the action. The action is over stylized and almost indistinguishable from the other Disney-produced blockbusters. During the sparring scene for example, when Mulan uses her qi, the edges of the frame are blurred and slow motion is used. This technique is overused throughout the film and it ends up distracting from the action being presented instead of adding anything to it.

The action is also too similar to other Disney properties like the Star Wars and Marvel movies for the film to make an impression. To illustrate, during the final fight scene, what starts with people running up the walls devolves into a mass sword fight that has no real distinction from the sword fights presented in the most recent Star Wars movies. “Mulan” had the ability to draw on the greatness of Chinese wuxia (martial arts) films like “Crouching Tiger, Hidden Dragon,” and it does for some few moments of great action, but the majority of the film is bland action.

The other major flaw in this film is its tone. This “Mulan” wanted to be a PG-13 film, appealing more to the Marvel audience than the younger target audience of the original film. The problem with that is the comedy that this film has seems out of place and not necessary to its success.

This remake of “Mulan” follows the same story of the original. Mulan takes her father’s place in the Imperial Army to help fight off northern invaders. The changes that this film makes to the original is the removal of Mushu and the music, and the addition of magical elements qi and a witch character named Xianniang. These changes are overall beneficial if only for the fact that it distinguishes itself as different from the original, which a lot of Disney remakes fail to do.

“Mulan” does still have some other good qualities as well as being different. It is very well acted, with Yifei Liu’s performance as Mulan standing out. The story is well told, with its messages about family and honor shining through.

Overall, though, the good in this film does not outweigh the bad. I would not recommend spending the $30 you must spend to see it.