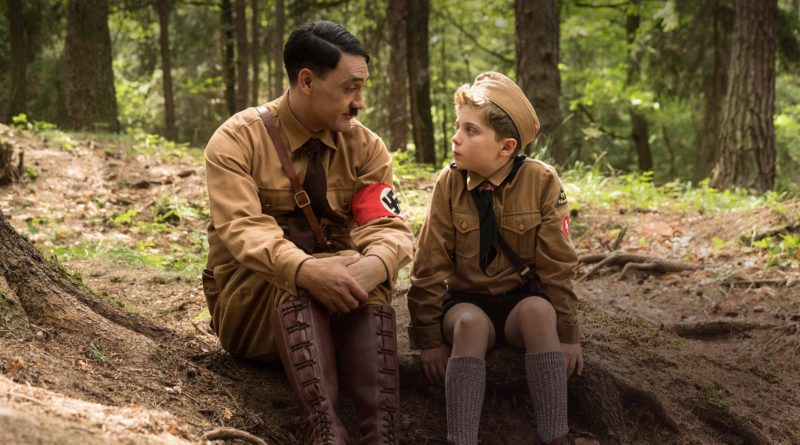 “Heil Hitler. Heil Hitler,” nervous ten year old Hitler Youth boy Jojo Betzler stares at himself in the mirror as he prepares for his first day at the Hitler Youth camp when his imaginary friend, Adolf Hitler, comically appears behind him to hype him up for the day. Full of confidence and energy, little Betzler hops along the street towards the camp with his only friend and fellow Hitler Youth Yorki.

Set in the last year of World War II, “Jojo Rabbit” is a comedy/drama-comedy movie, written and directed by Taika Waititi, released on Oct. 18 in selected theaters poking fun at the Nazis.

It is a dark humor film that tells the story of Betzler’s life through World War II. Betzler, brainwashed by authorities, was a Nazi-in-training with dreams of getting to serve Hitler in the war and potentially becoming his best friend.

It all changed when he discovers that his single mother, Rosie Betzler, had hidden a

Jewish girl, Elsa Korr, in a secret attic area in his deceased sister’s room, forcing him to confront his blind nationalism.

The part that stuck out the most was the when the camera pans to the sight of the public display of hanged victims and we see those familiar maroon and white shoes. The whole theater was shocked, it was the saddest scene in the movie for me. We hear Betzler cry into his mother’s pants while hugging her for the last time, not wanting to let go.

Although this film is labeled as comedy, it can be sensitive to some people because of

the topic it focuses on. The film depicts some graphic war images and of lynchings during the war, but it also has elements of romance and drama. It leaves the audience full of laughter one second and on the verge of tears the next second.

I do recommend watching “Jojo Rabbit” for people in the older age group and certain teenagers, but not kids since it is rated PG-13 and it isn’t what you would usually expect for a typical movie set in this time period. I enjoyed it a lot especially since it shows a different narrative of World War II.