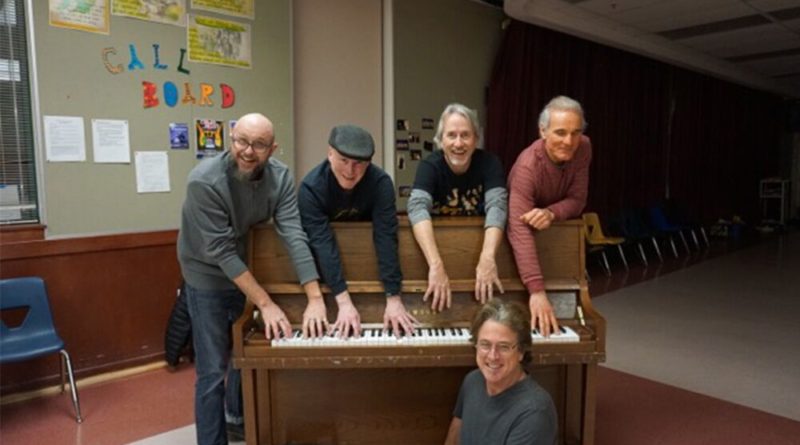 Thirteen guitars lined the stage as hundreds of people sang along to “Hey Jude” with the Sun Kings in the Center for the Arts on Feb. 23. An audience mostly made up of men and women over 50 danced and sang along with the Beatles tribute band playing songs that took them back to their youth.

Never having gone to see a tribute band before, I assumed I would see men dressed in Sgt. Pepper costumes with 70s style wigs and fake British accents. Instead five guys in jeans sang songs I grew up listening to like “Yellow Submarine,” “Lucy and the Sky with Diamonds,” and “Help.”

It was obvious they enjoyed playing the music they love for people who love it too.

Tribute bands started becoming popular in the early 2000s, when the Sun Kings started up. The name stems from the song Sun King in the Abbey Road album.

“Someone has to do it,” they all replied when asked why they play Beatles music 50 years after the Beatles last performed live.

Band members grew up listening to the Beatles on the radio, loving the band just as much as the rest of the world. They don’t have a favorite song because it changes weekly and they rediscover songs after playing them for years.

Before the show, I mentioned one of my favorite songs was “Penny Lane” and on stage they dedicated the song to me and then had to restart after blanking on the lyrics. They asked the audience for help and almost half yelled back the first verse.

“I’ve been going to see them for ten years and that’s never happened before,” said a woman sitting behind me.

The Beatles were such an iconic band that many people believe their music should not be recreated. The Sun Kings obviously disagree because “there are so many ways to interpret the Beatles’ music.”

“They want their music to be remembered as doing good things in the world and also about love,” said Harrison.

It’s been half a century since the Beatles were the major craze, but most of their songs are still relevant today. “Revolution” was a song written to the student revolutionaries of Paris, later joined by a general strike because millions of people felt suppressed by their government. The Sun Kings played the original slow version of the song written by John Lennon, reminding the audience of its significance.

Despite the fact the Beatles are the best selling artists of all time, have been in five movies, and their album “Sgt. Pepper’s Lonely Hearts Club Band” was rated number one album by Rolling Stone Magazine, they stayed true to their message.

“As they got famous, really famous, they never lost sight of themselves,” said Harrison.

The Sun Kings completed an amazing concert. Harrison’s singing and guitar were great, Southard hit McCartney’s high notes like no other, Coe had people’s eyes light up during his guitar solos, Scarpelli rocked the drums and his solo, and Barrett captured the odd sounds the Beatles placed in their songs such as “Yellow Submarine” perfectly.

After a standing ovation, the band played a 15-minute medley of the Abbey Road album including “Here Comes the Sun” and “Polythene Pam” for an encore.

As people were leaving the theater, I heard a woman telling her husband that when she closed her eyes and listened to the music, she “felt 20 again.”