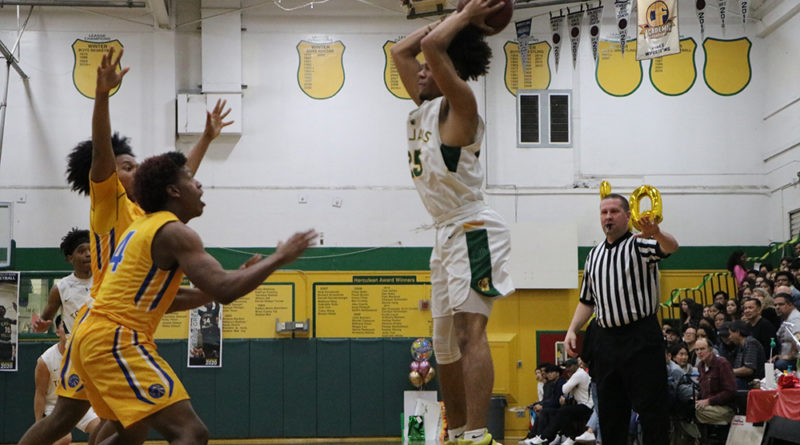 Senior Kheti Goss scored the winning points at the last game of the CVHS boys varsity basketball game against Mt. Eden, on Feb. 14.

“ When I saved the game, I was so happy that we won our last game and I felt like I was on top of the world,” Goss exclaimed.

Trailing by one point in the final seconds of a nail-biting game, senior Arquil Hill stole the ball away from an opposing Monarch and passed it to Goss. In a rush of panic, the Monarchs fouled Goss.

Anxiously, Goss went to the free-throw line, having the weight of his team on his back. As his nerves coursed through him, the whole gym went silent and took a breath.

Goss went through his routine on the line, looked up, and banked the first one to tie the game. Everyone jumped in excitement, as the score was 60-60.

Goss relaxed, gaining more confidence in his second shot and swished it in, making the score 61-60, Trojans leading. The crowd exploded in cheers and yells, halfway on the court. During the last three seconds, the Monarchs tried to score, but time ran out, and the Trojans snagged the win.

A crowd of family and friends stormed the court to surround Goss and the team in a dog pile. Everyone was falling over one another, electrified over the big upset. The crowd picked up Goss, chanted his name and carried him around the gym.

“When Arquil stole the ball I was relieved because if he hadn’t got the ball, our chances of winning that game were slim,” Goss said.

Hill played his part and was very determined to win his last game. He was zoned in and focused on getting the ball back, so CVHS could get an opportunity to score.

“Going into the last 19 seconds down by just 1 point I knew we had to score if we wanted a chance to win. I tried to stay locked in on defense to get a steal and score to give our team an opportunity to win the game,” Hill said.

In their last game,  the Trojans won their first game in WACC play and finished with a record of 9-17.