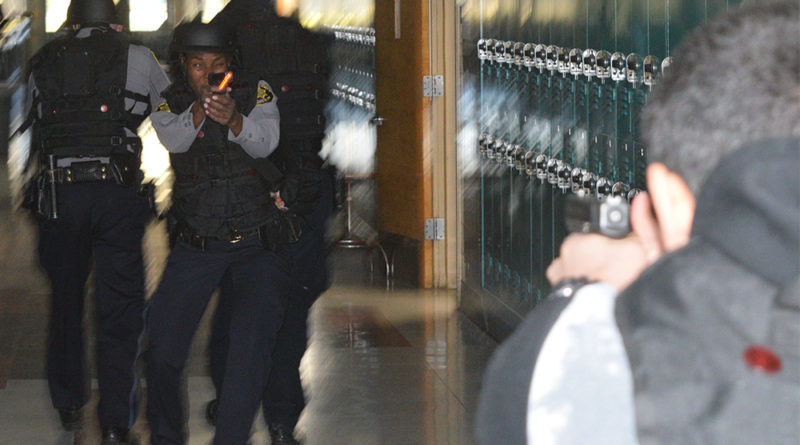 As school shootings loom over the nation, our school district is one of many to address the elephant in the room. Alameda County Sheriff’s Office and Hayward Police Department officers united to practice shooting-scenario drills in our high school on Jan. 2.

During one such shooting drill, I volunteered to participate as a “victim” alongside cadets, university-age participants, and Explorers, who are high school-age students seeking police-related jobs.

The officers were given first aid lectures and door-breaching lessons before the shooting drill. Students were divvied up into two teams; some members were given vests that would react to the prop guns used in the activity.

The activity itself was relatively simple and had little variation at first; cadets and Explorers would cower in classrooms pretending to be students while “the shooter” stayed outside at the beginning.

As the police arrived, the cadet playing the shooter yelled at other cadets near him, “Now you’ll pay!” Using a simulated gun, he pretended to shoot one of them.

The shooter then retreated to our classroom and shot blanks a couple more times. Then police swarmed into the room and, using simulated weapons, pretended to shoot the assailant.

The first phase of the drill was done: eliminating the threat. This process was covered during the lecture given to the officers, using the acronym SMACE (Stop the threat, Major blood loss, Airway, Chest, Evacuate).

Then officers provided first aid to those who needed it. Supervising officers and participants discussed the exercise after its ending.

I was assigned a wound to the shoulder and was told to say that I have “trouble breathing.”

Sometimes I was searched via pat down, sometimes it was merely mimed. With our hands on our heads, we evacuated to the hallway where the drill was reset for the next group.

The whole event was eerie. I was sitting in a classroom as simulated shots were fired. What really brought the activity home for me, however, was the careful gathering up of the simulated bullet shells ejected by the shooters’ guns.

The officers were careful to remind us that the activity was not just a play-fight but practice for real emergencies. During one drill, the victim who was “shot” at the beginning of each performance was dragged into our classroom and was confirmed “dead,” right in front of us all.

While the shooter had no variation in his performance, the police officers’ responses varied and were surely evaluated.

Here’s to hoping that those officers never have to use such tactics, and that a real gunshot never rings through the halls of our school.