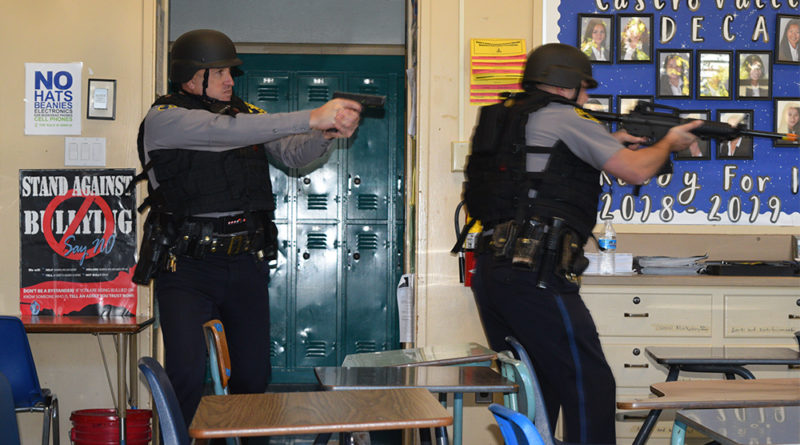 What would happen if an armed intruder shot students and took hostages on campus? Law enforcement officers practiced dealing with this issue in an exercise at CVHS on Jan. 2.

In the exercise, police responded to simulated shots fired in 100 hall. An angry young man with a simulated gun had “shot” a couple of students, leaving one apparently dead. He later stormed into a nearby classroom with a couple teachers and students. People were frightened and screamed at the sudden intruder. Just then, about a dozen officers rushed in with their simulated guns out and “shot” the intruder. The hostages were safely escorted outside. As real as it seemed, it was only a drill.

About 25 officers from the Alameda County Sheriff’s Office and Hayward Police Department gathered for training sessions in the library, 100 hall and 200 hall.

The young man who had pretended to be the active shooter was a junior cadet along with the other cadets and high school Explorers who had volunteered to play other roles such as hostages in this simulation. Many kids were volunteer actors from CVHS.

The purpose of this whole drill for officers to practice responding in case of a real active shooter.

Sgt. Keith Lydon gave a lecture about some first aid tips and what to do if someone is shot. He went into detail about tourniquets and many other first aid information such as occlusive dressing and hemostatic agents. An important acronym he kept on pointing out to officers was “SMACE,” which stood for “Stop the Threat, Major Blood Loss, Airway, Chest, Evacuate.” Lydon’s main objective is to make sure people are safe.

“This is the second phase of the active shooter response by law enforcement in terms of organizing rescue efforts to help those that have suffered any sort of injury and efficiently get them treatment as soon as possible to minimize any loss of life,” said Lydon.

Another training session was conducted by Detective Marcus Cox, who happens to be a CVHS graduate. He gave a session about “breaching,” or breaking through doors. In case of a shooter, the first step is to get into the room with the threat.

“If we have a critical incident or somebody needs help inside, we have to be able to get in to those doors. We can’t help you if we can’t get in,” he said.

Although this was just a drill, officers and volunteers made it as real as possible.

“During one drill the victim, who was ‘shot’ at the beginning of each performance, was dragged into our classroom and was confirmed ‘dead,’ right in front of us all,” said junior Arya Emadi, who volunteered to be one of the students in the classroom.

In the case of an actual emergency, Cox advised people to do act quickly to protect themselves. “Run, get out of there, hide. If you have no other options, then as a last resort you may actually have to fight,” he said.