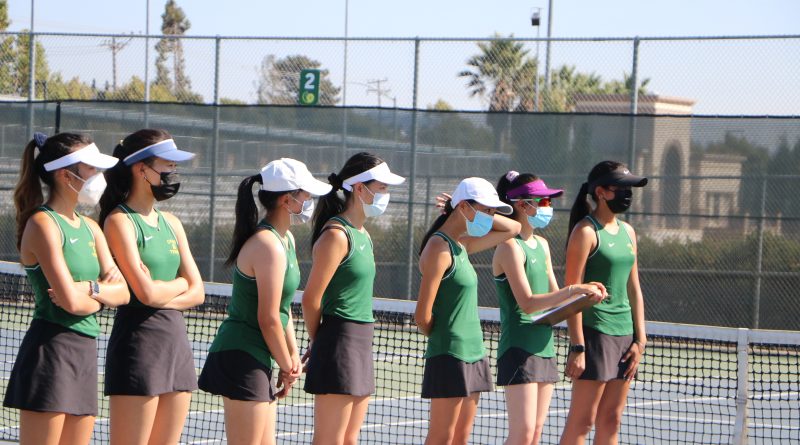 Although many matches went on to a third set, the girls tennis team was victorious against the San Leandro Pirates on Oct. 28 with a score of 4-3, for their last home match. Many celebrations took place after to celebrate the team’s senior night as well.

Seniors Marissa Chan, Chelsey Lu, Aneet Mangat, Helena Liu, Levina La and Leewon Koo gave honor to their last home tennis match by putting all their effort into their sets, regardless if they won or not.

Singles player Chan and doubles players Koo, Christina Fielder, Mangat, Liu, Nicole Dong and Faith George succeeded in their sets and went on despite the rigorous efforts of the Pirates.

Mangat and Liu played number one doubles. Although they lost their first set with a score of 5-7, they persevered and won the next two sets with scores of 6-1 and 6-2. ¨My partner was really great and kept giving me pep talks when I was down. Teamwork and communication really helped. I´m really sad it´s senior year, but I’m glad I had this experience to play tennis,¨ said Liu.

Lu was disappointed that the game was her last home match, but she is optimistic for the effort she´ll put in during their last matches. ¨Senior night was very heartfelt and bittersweet. I got a lot of memories, but it’s bitter knowing it´s my last time doing all of these things,¨ Lu stated.

Sophomore Justine Fong prepared all of the senior gifts for the night which consisted of headshot cutouts of all the seniors, photo collages and roses. “With my whole heart, next season will definitely not be the same without all their hilarious personalities and hard-working hearts. I’m disappointed that the seniors won’t be there to celebrate my senior night with me,” Fong exclaimed.

On Friday Nov. 5 and Saturday Nov. 6, the girls tennis team participated in the WACC Annual Tournament. Chan and Fong represented CVHS and won third place in doubles scoring them an invitation to NCS. The Trojans gave it their all, considering it was their last tournament of 2021.