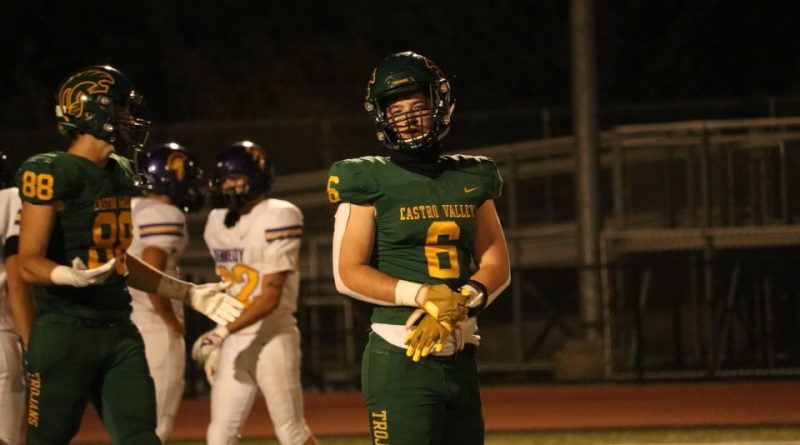 The stadium lights were blinding on Senior Night. Spirits were high as people gathered to celebrate the last home football game of the season. Before kickoff, senior football players, dancers, and cheerleaders lined up to be honored one final time.

As his name was announced, Chase Robinson stepped out from under the inflatable Trojan helmet, grinning as his fellow teammates roared. Accompanied by his parents and sister while donning the number 6, Robinson gallantly strode down the field with a large green hammer in his hands. A symbol of strength and achievement, the hammer has long been regarded by the football team as a good luck charm. On the back of Robinson’s helmet, “Be the Hammer” was written out in bold block letters. And that night on the field, the “Hammer” he was.

After losing interest in soccer, Robinson began playing football in sixth grade for Canyon. He has actively participated in the sport every year since then and is now a captain for the Varsity football team. Calling defensive plays, Robinson is a linebacker and tight end. His versatility on both sides of the ball allows him to make both score-boosting touchdowns and crucial tackles.

“He’s not afraid to do the things that a lot of kids don’t want to do, like getting contact or mixing it up with kids that are bigger than him,” noted P.E. teacher and football head coach Denny Molzen.

During Senior Night, Robinson contributed to nearly all of the tackles made against the opposing team. His defensive capability helped limit them to merely two touchdowns, handing the Trojans the win. As the “Hammer,” Robinson slammed down anyone with the football nearby, an act of confidence and authority.

“He just cares, and wants to be and do well. I think his drive is what makes him a really good football player,” explained Molzen. “He tries to be a leader and do things by example.”

Not only does Robinson’s exemplary playing have a hand in victories, but his leadership does as well.

“He is a great teammate and leader,” stated junior quarterback Nolan Barnes. “He picks the team up and motivates everyone to work hard.”

Despite his skills in the game, what Robinson cares most about football happens off the field. More than anything, he cherishes the memories made with his teammates. When asked what his favorite part about football was, without hesitation he said: his friends.

“I made lifelong friends that I wouldn’t have been able to make if I didn’t have football,” mentioned Robinson. “After a team win when we’re on the bus, it’s the best feeling ever just being with my friends.”

As the friendships Robinson has made in football will last a lifetime, so will the lessons he has learned. Through defeat and triumph, he discovered the importance of perseverance and persistence.

“The most rewarding thing about playing is knowing that after every play you get back up. It teaches you the life lesson that no matter what happens, you get back out,” he said.

Robinson has faced losses, frustration, and disappointment. In spite of these challenges, he raises his head with determination and rises up with more willpower than ever before, leading his teammates along the way. He is the “Hammer.”