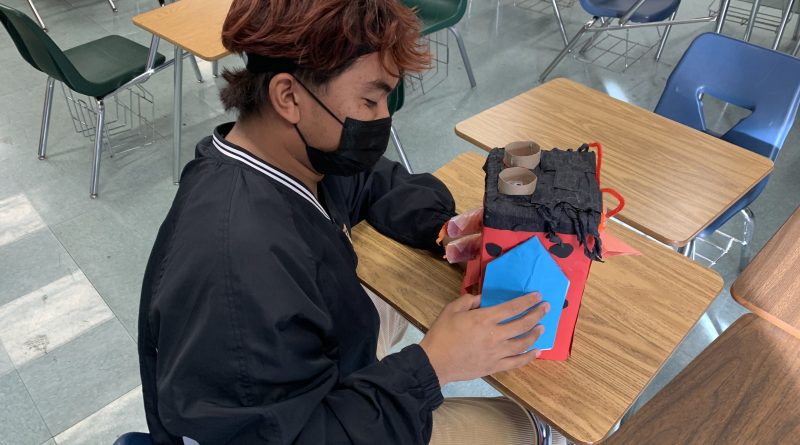 Many kinds of great foods, an assortment of colorful flowers, songs and dances, and even parades – all for the dead?

Dia de los Muertos is a two-day holiday that has been celebrated throughout Mexican and Latin American cultures for millennia, in which joyful celebrations are held for the souls of those who have passed, rather than mourning their deaths. CVHS classes have taken a great step into the scene of Dia de los Muertos, with celebratory decorations being put up and student-made events for the day. Day of the Dead has also encouraged the classes to create alebrijes, which are colorfully painted figures that represent spiritual animals.

“We do Day of the Dead not just to represent the language, but to bring culture to represent Hispanic students. By bringing culture, we bring our community together with the other cultures in the school. We bond by presenting who we are and what we do,” explained Spanish teacher Antonio Acosta.

Dia de los Muertos takes roots in the idea that the dead should be honored through celebration and joy. According to National Geographic,  the event “[Assures] that the dead won’t be insulted by mourning or sadness.” It “celebrates the lives of the deceased.” These celebrations also support the remembrance of those who have passed within communities, keeping bonds between people very close.

“It is important to bring Day of the Dead to the school for Hispanics because it is important for the students to feel close to their roots. With cultural celebrations, it brings awareness of roots and culture,” Acosta described further. In other words, not only is it beneficial to spread and connect the cultures within the school, but for Hispanic students to deepen themselves within their own culture and feel connected to their history.

Although the traditional aspect of Dia de los Muertos is extremely important and prevalent throughout the holiday, the simple things bring many more people in to enjoy the celebration.

“What I like most about Dia de los Muertos is seeing the parades happening and all the colorful costumes,” explained junior Zean Ylaya.

According to The Independent Newspaper, about 300,000 people in Mexico City alone actively celebrated Dia de los Muertos in 2017. Additionally, National Geographic states that many other spiritual places celebrate the event, amongst them being Pátzcuaro, Mixquic, Tuxtepec, Aguascalientes. The celebration pushes even towards countries like Haiti and Colombia.

The meaning of Dia de los Muertos has remained true to its core for thousands of years, shedding light on those who have passed. As long as those are around to remember the dead, the spirits can linger around a little longer.