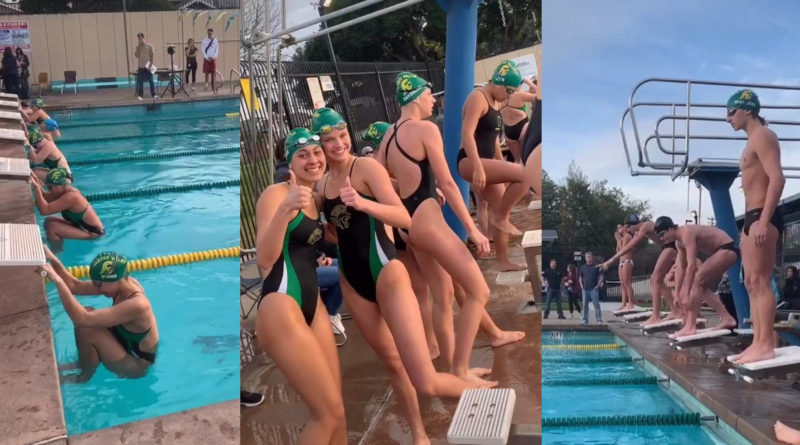 The 2020 swimming and diving season was cut short due to the COVID-19 virus after the teams lost their first and only meet against Alameda. The varsity boys team lost 88-81 while the varsity girls lost 97-72.

The boys won in the 200 medley relay, 50 freestyle, 100 fly, 200 freestyle relay, and 100 backstroke. However, neither team was able to secure the win against the Hornets.

Both the boys and the girls had large goals for the season. The teams were looking to win the championships this year.

“Some of our goals were for the girls to win WACC champs this year,” said senior Jodie Ma.

Others hoped to improve their individual times.

“My goals were to just improve my times throughout the season. I was also hoping that all CVHS swim teams (JV boys, JV girls, varsity boys, and varsity girls) would win champs this year,” said senior Sarah Althoff.

Many seniors were looking forward to their last year on the team and simply wanted to enjoy themselves.

“Since I’m a senior, my goal for the season was to just have fun with my team and enjoy myself because it’s my last year,” said Ryan Brookens.

The seniors were also disappointed that their last season was canceled.

“I’m really sad my senior season got canceled, I was really looking forward to finishing up my four years on the team alongside my friends and teammates,” Althoff said.

“As a senior, it is really sad I won’t get a senior night, but I’m so glad I’ve been able to swim all four years for my high school,” said Ma.

Despite the shortened season, the team still had fun and enjoyed their practices together.

“The swim season for what it was was pretty fun. Practices were definitely the highlight of my season since I got to spend so much time with my friends,” Brookens said.

The coaches saw a great potential in the swimmers but were unable to get to know them well both as individuals and as a team.

“We had a lot of strong specialized swimmers whom, when they came together could let their individual talents come out and really succeed in a group setting,” said coach Chris Wittington. “We did not get enough time to get to know every swimmer in-depth, I would have liked to know the swimmers better and worked with them on their preferred events.”

Wittington is grateful for the time that he got to spend with the team and looks forward to the next season.

“For the little amount of time we did get together I could see that many swimmers had a determined attitude and were great to work with. Hopefully, everybody recovers and we are able to have a strong swim season next year,” Wittington said.