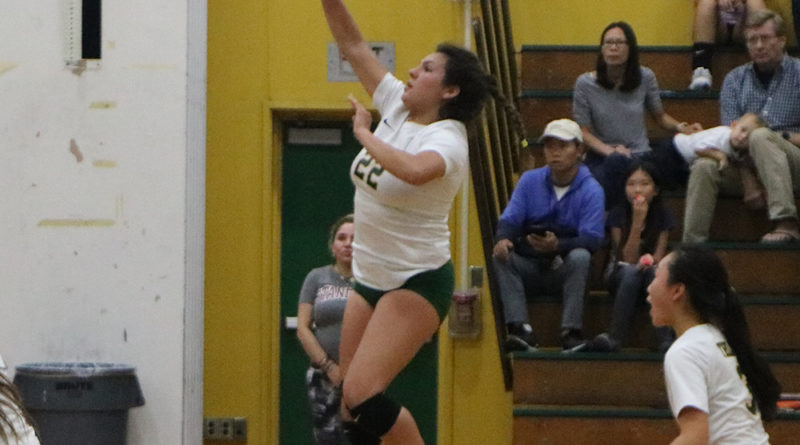 Tie-dye t-shirts kicked off the season for the varsity volleyball team thanks to their captain, senior Ashley Chacon, who got the team together for a day of making shirts and joking around to ease their nerves about the upcoming season.

“I’ve taught them not to stress over the game,” said Chacon, who helps hold the team together and mentor the younger members.

“It all just falls into place when you’re enjoying the game,” she said, knowing that a good team doesn’t have to be a distressed one. Chacon is a firm believer in stress relief, even if it involves minute-long meditation sessions that are thrown off by laughter and jokes.

Now, as the team captain, she’s become a mentor for her teammates. Especially for the underclassmen on the team, she’s been a guiding force. Kaitlyn Chihaoui had tears in her eyes when she gave her senior night speech about Chacon, saying, “She’s the most caring, helpful person I know. I couldn’t have made it through freshman year without her.”

Chacon’s volleyball career has been impressive to say the least, having made varsity as only a freshman and holding almost a decade of experience under her belt.

She uses her role as captain to mentor and comfort others, saying, “I don’t think being captain is a title or a job, it just means that people look up to you for direction.”

Volleyball is anything but dull with her. The athletes often have pregame lunches, bonding events, and even dress-up days where themes like Disney, gender swap, and college gear bring laughter and joy to the team.

Chacon plans to take her skills and bright spirit to college and continue her volleyball career, although no plans are set in stone at the moment.