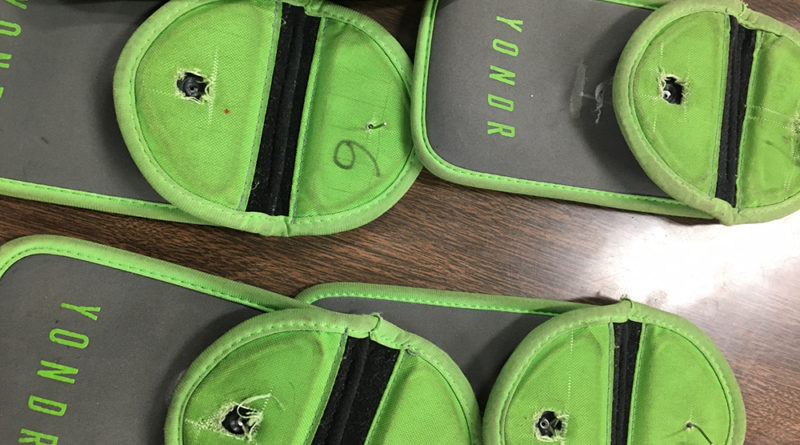 Students in Japanese teacher Emi Crow’s classes are living without their phones during class each day. Crow requires the students to place their phones in Yondr pouches from the start to the end of class.

“The addiction is really bad… the students can’t resist it,” Crow said. “I started five years ago, but before that you’re just trying to tell the student to put it away.”

Yondr pouches are mobile phone pouches which close with a lock, and an magnetic base for unlocking them.

The procedure for the pouches are typically locking the phone inside upon entering class, keeping it on your desk until class is dismissed and then going to the unlocking base to free their devices.

Crow was able to get the pouches for free by signing up when they were first released.

Though some teachers like the new idea of implementing Yondr pouches in their classroom to prevent phone usage, students mostly think it’s excessive.

“I think teachers should be open about using phones. If they tell us to put it away, we will,” said senior Sukhraj Sandhu.

Senior Jessica Lu is more supportive of the idea. “At first I thought it was necessary because everybody wants to be on their phones, but over a couple of years you sort of grow used to not using your phone. Like in AP Japanese, we don’t even touch our phones even if we don’t use the pouches,” she said.

Eight social studies teachers hope to implement the pouches in their classes as well. Teacher Jennifer Sitkin asked the Castro Valley Education Foundation to pay for some. The pouches cost $23 each per year, so supplying full classes with them would cost thousands of dollars.

Since some students can’t endure the time away from their phones, they have a few discreet ways around it. Some students close their pouches halfway to easily unlock by shaking, bring in an old phone to substitute, or simply lie about not having a phone.

If cell phones continue to be a distraction in class, it is possible more teachers will start to use Yondr pouches as well.

“I just feel like if you let people have their phones, they’re less likely to use it. If you tell them not to use their phone and take their phone away from them, they’re going to want to use it more,” said senior Colleen Starzak.