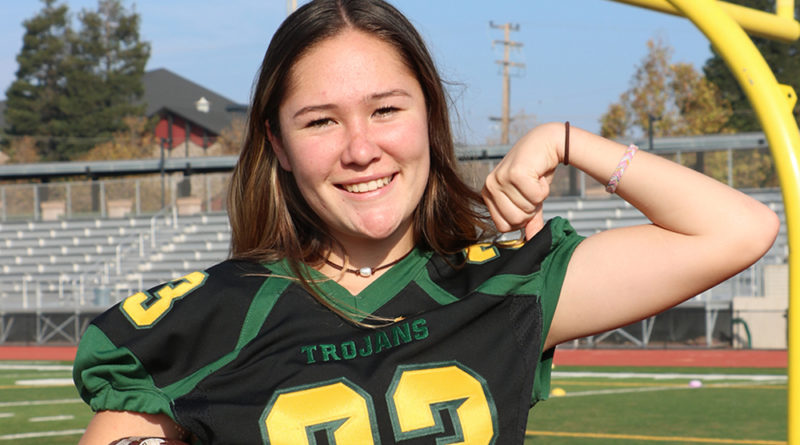 In the final moments of the varsity football team’s game on Nov. 2, the Trojans were determined to defeat the Highlanders in the last game of the season. A wild game had gone into overtime and came down to a 28-yard field goal attempt by kicker Leikela Lunt.

The crowd was roaring, increasing the pressure even more. Lunt took her place on the field, focused for the next moment.

“I just tried to zone out everything and I just remember it getting super quiet all of a sudden,” said Lunt. She kicked the ball and it flew toward the goal post.

Hours earlier, energy was high as the Trojans rode their bus to Piedmont. Because a JV player was injured and hospitalized in a game against the Highlanders last year, the Trojans were eager for revenge on Piedmont’s senior night.

“Usually the team will do chants and I will be in the back because I don’t have the same testosterone as them, but we were all crazy with a positive energy from everyone,” Lunt.

The game began evenly matched, the ball constantly going back and forth.

“It was a hard fought game that was full of ups and downs with lots of amazing plays from all number of kids,” said coach Denny Molzen.

Zach Sandoval ran 22 times for 133 yards and two touchdowns, and caught four passes for 69 more yards and another touchdown. Cameron Calvillo ran a touchdown in from eight yards out.

On defense, Marcus Miller and Sandoval had eight tackles each, Vincent Rivera and Milad Siddiqi recovered fumbles and Colin Thompson intercepted a pass.

Towards the end of the fourth quarter, the Trojans were down by seven points with time running out. Suddenly they scored a touchdown, bringing up a point after touchdown (PAT) kick which Lunt had to make to keep the Trojans alive.

”That was the first scary kick I had to make because I had to tie it, so if I would’ve missed, which I had earlier in the game, we would have lost,” she said.

After Lunt kicked the ball through the goal posts, the team congratulated her with hugs and high fives. ”I thought that was going to be the scariest kick of the night but then I was like ‘Oh shoot we are going into overtime!’” said Lunt.

As the Trojans started on offense, Cavillo threw a touchdown to Sandoval, setting up another kick from Lunt. “I was super nervous the entire time, and then we scored and I had to make the next PAT to keep us in the game,” she said. Lunt made another successful kick and was quickly congratulated again. The Trojans led by seven, but the drama wasn’t over.

Piedmont went on offense, with the Trojan defense almost making a stop, but the Highlanders too were determined, scoring a touchdown and extra point to tie the game, 28-28. The Trojans would need to score again to win.

“It was eventually our turn on offense and I thought we were going to score so I didn’t have to kick a PAT, but it started not to look like that so my coach tried to calm me down because he could tell I was pretty nervous. My toes were numb, like how am I going to kick if my toes are numb?”

As the Trojans drove to the Piedmont 11-yard line, Lunt kept practicing on the sideline. Then it was time. Lunt took the field, undeniably feeling the pressure.

Lunt has been the varsity kicker for two years now, with this season being her last. Lunt has loved being part of the program and has tremendous appreciation for her fellow players.

“This season overall we had more of a drive to win and had a better attitude about things,” emphasized Lunt.

As the only girl on the football team, many may wonder how she does it or what her experience has been.

Lunt followed the same conditioning and expectations has any other male player on the team. She went to film, weightlifting, all trainings, and bonding events. She would ultimately walk into the locker room as one of the guys.

“Being a female in very male dominant sport, overcoming breaking a barrier which I’m sure hasn’t been easy at times for her, all added to the moment,” Molzen said.

Lunt ran up to the field with her game face on zoning out the loud cheers of the stadium. The next moment she would remember forever after the ball left her foot. The ball gracefully went through the goal posts followed by screams from the crowd and a mosh pit of congratulatory hugs. The Trojans had won, 31-28.

“All of a sudden I got taken by the football mosh and they were picking me up and handing me to different people and being like ‘THANK YOU WE LOVE YOU!’ It was insane,” said Lunt.

“That will be a memory our players and Leikela will cherish for the rest of their lives,” said Molzen. “All the hard work, sacrifice and time is well worth moments like we had. The tears of joy, smiles, hugs, well wishes, display of love and affection for each other were just amazing.

Molzen expressed pride in Lunt and his whole team. “It was a total team win with lots of players stepping up because of injuries, Milad Siddiqi, Edwin Omeragic and Sean Padilla in particular,” he said. “We fought through adversity, played physical and unselfish ball and had big and timely plays in all three phases of the game.”

One thought on “Leikela Lunt brings home the season-ending win”