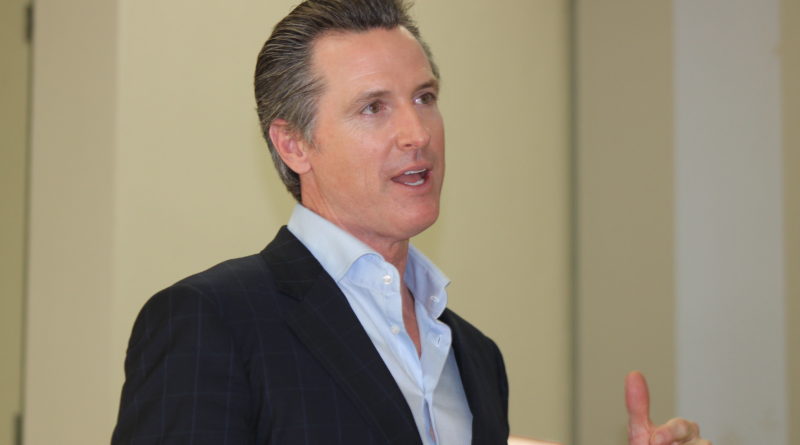 Olympian: What makes you the most valuable candidate for young people?

Newsom: I think a willingness to step up and step in. I’m not someone who’s timid. I try to bring my authentic self. I’m not one of those politicians that says one thing in private and another in public. I was the first person in the United States that started marrying same sex couples. Back in 2004, over a decade ago, I married 4,036 couples from 46 states on the steps of City Hall. I say that as sort of a prove-point that I want to be bold. I’m not like a lot of politicians that, frankly, tend to be timid and play in the margins. So I think for all those reasons, in addition to having four young children myself, and having a deep appreciation for the challenges, struggles, and aspirations of young people, I think I’d be the right candidate.

Olympian: What parts of your public service career are you most proud of?

Newsom: Criminal justice reform. I’m vehemently opposed to the war on drugs, which has been a war on poor people and people of color. I’m very proud to be a principal opponent to increasing college tuition. I’m a very proud supporter of public education. I’ve received the endorsements of every education group in the state, from the teachers on down, and the administrators. I’m very proud of that because I support our public schools and public teachers, and believe very strongly in bringing social services into the public schools: wellness centers to deal with physical health needs and adolescent mental needs, arts education, every child, every classroom, K-12. We have a proposal to create a college savings account for every entering kindergartener in our K-12 education, something I did as mayor. I’m proud of those efforts. But I’m also proud, perhaps more than anything else, of getting 12,000 people off the streets when I was mayor of San Francisco, the most significant effort to address the most vulnerable members of our community. That’s something that’s so evident to all of us; it’s never been worse in this state. We need a governor who cares about homelessness.

Olympian: Your California Promise is to make two years of community college free. How will you make four-year universities more affordable?
Newsom: That’s the challenge, right? So, the community colleges, we’ve already done one year free… I’ll easily commit to doing the second year free. Hopefully this time next year that will be accomplished. The challenge with the four years, is that in order to make four year college free, it’s billions and billions of dollars. Not just a few billion, it takes a significant amount of money to roll back the tuition costs. So, for me, it’s about holding a line against any subsequent tuition increase, and then significantly expanding the investment into offsetting the full cost of education. Tuition is a relatively small percentage of the overall cost of college. It’s transportation, it’s housing, and it’s books. That why we have a significant proposal to increase our funding, and subsidies, and loans, and grants to deal with the broader costs of education. Hold the line, oppose any subsequent tuition increases, significantly increase the investment in our institution higher learning, and try to offset the overall cost of attendance.

Olympian: As governor, how would you respond to the Trump administration’s agenda?

Newsom: Go on my website, you will see. I’ve been aggressive. Check out my Twitter feed, our Facebook. Go on my website you’ll see all these commercials and cartoons. We’re pushing back hard. Look, I’m not timid, I’m happy to go toe-to-toe to the Trump administration. We’ve been as aggressive as any elected official in California, pushing back against Trump-ism and his assaults on our environmental values, on our diverse communities, particularly our Dreamers. Let’s all maintain that vigilance, but do go on my gavinnewsom.com website for some fun videos so you can see specifically what I’m talking about.

Olympian: We have one last question. If you win, will you promise our class another interview?
Newsom: The answer is yes. You’ve got my word.