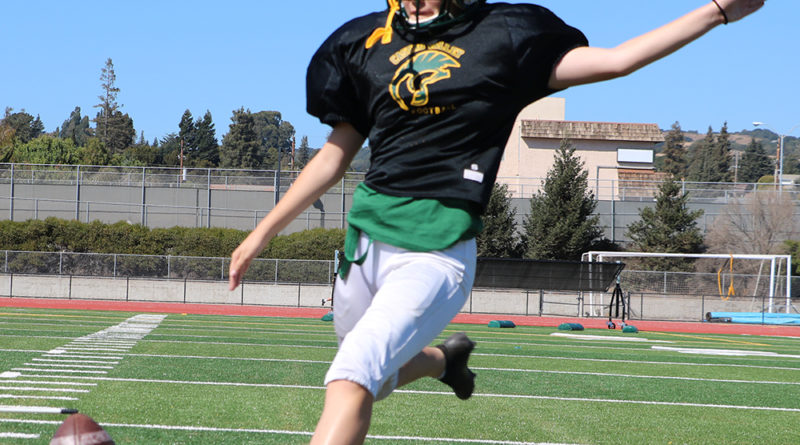 Leikela Lunt is making history as the first girl to ever play and score for the CVHS varsity football team as kicker, scoring a total of 4 PATs this season so far.

This all started when Lunt or “Kia” as she is known to her friends, wanted to see how far she, a star player on the girls soccer team, could kick a football. From 45 yards out, she took two big strides, cranked back her leg and WHAM. The ball whirled through the air and between the uprights. One of Lunt’s teammates grabbed her phone and recorded the kick. The clip made its way to the school’s football coach.

“From day one Leikela has been a wonderful addition to our team. She’s had a positive attitude and worked hard. The team has welcomed her as their teammate,” said varsity football coach Denny Molzen.

While Lunt feels comfortable on the team now, this was not the case initially.

“At first they made stupid remarks like calling me woman after any sentence I said, or if I asked why no one was listening to me, they’d say it was because I’m a woman. It was more jokingly, and never like ‘you’re a woman and you don’t belong here,’ but more like, ‘we’re gonna joke around because we can.’ I tried never to take it personally, and instead just prove myself on the team,” said Lunt.

Lunt is no stranger to athletics, as she participates in varsity soccer and track, but football requires a type of conditioning she’d never done before, such as weight lifting.

“They definitely mansplained weight lifting to me! Maybe dumbing it down for me was necessary, but also… I know how to lift a weight, I’m not stupid,” remarked Lunt.

Football has certainly added to her athletic repertoire, but soccer remains her primary commitment. She hopes to commit to a university for soccer in the upcoming year. Football, she says, adds to her soccer game due to the additional conditioning and coaching she has for her technique.

However, Lunt has often questioned the value of daily football practices, as her daily routine often looks something like football after school, to soccer after football, and then getting home at around 9:30 or 10 p.m. to do homework.

On top of her crazy schedule, it’s hard for Lunt not to feel isolated from the team.

“There are definitely times I feel like quitting, especially if I had a bad kicking day or if I take some of the boys’ comments a little too personally, but there have been instances where I’ve almost cried because little girls have been waving to me when I have football jersey on, or just adults telling me how brave I am,” she said.

Lunt says she gets the most support from her fellow kickers on the team, because being a kicker in the first place makes you seem like “the least strong,” so it definitely doesn’t help that she’s a girl.

“Leikela is a great kicker and it has been so much fun kicking with her this year!” commented fellow kicker and senior Payton Morgan.

Lunt is still a junior, and when asked if she would continue football next year, she is optimistic about her prospects about becoming the first string kicker.

“I think more girls should try out, and give those boys a run for their money! We are stronger than they give us credit for,” she said.

One thought on “Lunt kicks through gender barriers”