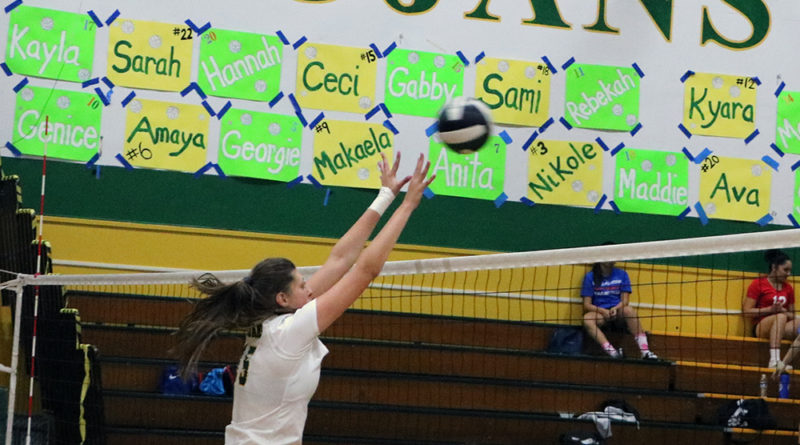 The varsity girls volleyball team tamed the Liberty High School Lions during their senior night volleyball game on Oct. 24. Winning the match 3-0, the athletes were ecstatic to make playoffs and celebrate their senior players all in one night.

The moments leading up to the match were very emotional, as the underclassmen players made speeches reminiscing about each senior athlete. Celebrating their time on the team with flowers, tears, and hugs, the team went into battle emotionally charged and ready to win.

“I am so thankful to be a senior on the team, especially with this group of girls. I enjoyed being a leader on the team and getting so much support,” said Alexis Hoffman when asked about her experience during senior night.

Starting the game off well, the team kept a strong lead during the first period. With plenty of close saves and amazing spikes, the team won the set 25-13. One particularly memorable moment was when junior Amina Moummad literally bent over backwards to return a deep shot. Sending it over just in time, she scored for team and earned loud cheers from the crowd.

“My favorite part about the game was the intensity we had as a team. We always came together after every point with so much energy,” said Hoffman.

The second set was over quickly as well, featuring many amazing spikes from players such as senior Elika Unti. The ending score was 25-21. The Trojans played even harder in the next period, winning the third set as well, finishing the match.

Overall, the Trojans gracefully defeated Liberty High. Winning three straight sets, the team proved its strong bond and amazing support has them ready to face any challenge ahead of them.

“I’m thankful to have finished out my volleyball career with these girls and thanks to Coach Unti for everything he has done. Best team ever!” said Hoffman.