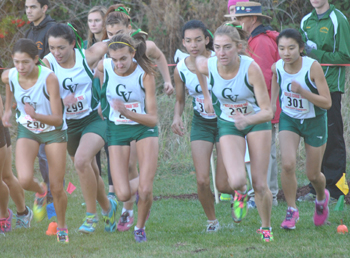 The Trojan varsity cross country teams finished their season at the NCS championship meet that took place on Nov. 23 at Hayward High.  As soon as the races commenced with a bang, runners from all over the North Coast ran with determination, ready to show off their talent.

Breaking her previous personal record time by 45 seconds, senior Nicole Anthony qualified the state meet with a time of 18:02. Anthony led the way for the Trojans with fifth place when she crossed the finish line.

“It’s about my team. We worked so hard, especially Emma. She totally killed it. I am so proud of her as well as my team and I couldn’t ask for more,” said Anthony.
Other runners included Emma Armstrong, who scored 23rd place with a time of 19:12. Sophomore Arianna Alfaro placed 37th in the girls competition, posting a time of 19:49. The girls team sprinted their way into sixth place with a team score of 152 points.

Longtime girls squad coach Raoul Perez said that daily practice has physically improved the runners’ endurance and it gave them more mental toughness. He was proud of the effort everyone displayed at the race and said that the team’s hard work had definitely paid off.

“We did a tremendous job. Nicole did extremely well in her race,” Perez said. “I was pleased with the outcome and I am looking forward to next year.”

Junior Carter Mackey also made it to the state meet. He walked away with second place in Division I boys race with a time of 15:28, two seconds ahead of De La Salle third place winner Luke Williams.

“I felt great and my conditions were good. I knew I was going to do well today!” said Mackey.

Racing competitively among a small crowd of runners, Chris Cervi sprinted ahead of them at the end and finished the race in 41th place with a time of 16:39. The varsity boys squad took 14th place overall in Division I.

“I thought Nicole and Carter both ran well and they were competitive. They gave it all. They really represented the school, the traditions, and the history in cross country team,” said head coach Dooney Jones.

The season ended well for cross country stars Anthony and Mackey at the WACC championships, the NCS meet at Hayward High, and the CIF State Championships at  Woodward Park in Fresno.

“Cross country has been my passion since I was little. Knowing that it is still my passion, I am happy to share it with everyone,” said Anthony.