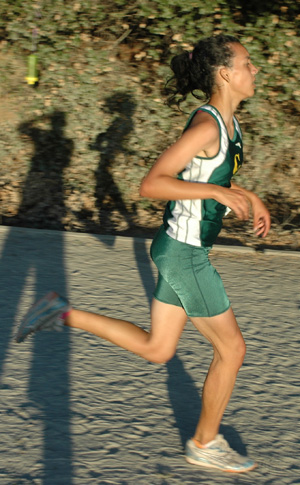 The Castro Valley girls cross country team raced to three wins in the race on Sept. 19 at Canyon Middle School, beating Berkeley 17-40, defeating Tennyson with a perfect score of 15 points, and winning against Piedmont 22-33, revealing their dedication and perseverance.

As the Trojans warmed up to get ready to run three miles, they were really focused and had their game faces on. The team knew that it wasn’t going to be easy, but as long as they had each other nothing was going to get in the way of them winning.

“As we began to run, my objective was to lead the race throughout, until I knew that nobody was behind me, so I just rushed through to try to win,” said varsity runner Nicole Anthony, who finished the race first.

Another varsity runner Emma Armstrong, who wasn’t that far behind Anthony, said that they were basically each other’s inspiration ever since the second grade.

“We both have been doing cross country since the second grade and been following each other’s footsteps since then,” Armstrong said. “I was excited for the race but it’s always good when you have your friends by your side.”

After the cross country race was over, it wasn’t really about finishing first that made the girls happy, but that when they were running they always knew that they had each other’s back and were there to support each other. The team truly proved that the key to winning is having genuine sportsmanship.