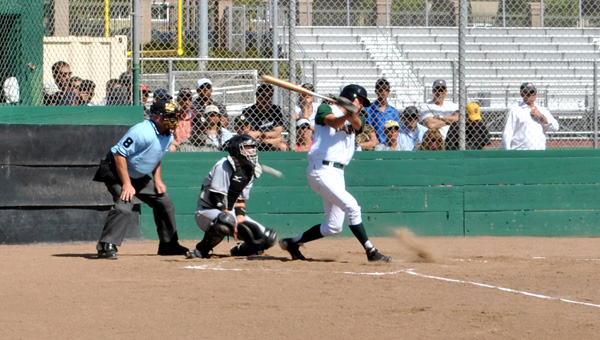 Sports
May 17, 2011June 7, 2011 Sarah 0 Comments Colby Wright, CVHS Trojans, Erik Wood, Joe Ross, Matt Barney, Matt Narahara, varsity baseball
The CVHS Trojans stomped the Dragons with a score of 5-2 in a varsity baseball game on May 4.
In the very first inning, Castro Valley pulled ahead to a 3-1 lead.
“We could tell we were going to win,” commented junior Abbey Connolly who watched the game from the stands. The Trojans were supremely focused.
“This is the showdown,” said Mario Iglesias.

Every time the pitcher would throw to one of the bases a runner was on, the opposing team would shout, “Back!” If the runner got lucky he would be able to scurry back to the base before the ball.

“It’s the best you’re going to get at a high school,” said Iglesias praising his team.

“It was a great game,” said junior Erik Wood.

The pitcher for Bishop’O’Dowd was Joe Ross who happens to be the brother of Tyson Ross, the pitcher for the Oakland A’s. His pitches were hitting 89-95 mph. Still the Trojans managed to get five hits against Ross. Jake Guintoli hit a triple and a double, and Wood hit a single and stole two bases.

“Joe Ross is going to be one of the best pitchers ever,” said Coach Iglesias after the game.

“It was a nervous kind of pressure. The kind that hones your skill and makes you better. The team helped me a lot with run support,” commented senior Matt Narahara.

He pitched for CVHS the entire game and struck out nine batters.

Narahara has been playing baseball for 12 years. He is looking towards becoming a major league pitcher and has a full scholarship to the University of San Francisco.

Very early on junior Colby Wright was hit by the ball and after the game a good sized bruise was evident. When asked if it hurt he responded, “[The baseball hit] didn’t hurt at the moment because of the adrenaline, but it’ll hurt tonight.”