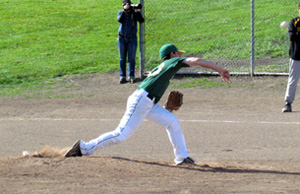 April 27 was a great game day for the junior varsity baseball team which dominated the Hayward Farmers with a final score of 12-3.

With Kyle Narahara as the starting pitcher, the Trojans started off strong. Narahara pitched for the first four innings, in which the Trojans quickly took the lead. By the bottom of the second inning, Castro Valley had four runs, leaving Hayward in the dust with 0.

In the fourth inning, the Farmers made their first run, followed to by two more runs which would be their last. In the fifth inning, Eric Nazario from Castro Valley took over and pitched from the fifth inning until the end of the game.

Dalton Whix hit a double and had made ten hits so far into the game. Mitchell Ornsby hit a double as well. The crowd was excited by the continuous runs by the Trojans and cheered on their team. By the bottom of the fifth inning, the score was 8-3 with the Trojans in the lead.

Immediately after the game, the boys cleaned the field together with great teamwork. “I think we did pretty good as a team,” says Narahara after cleaning up with his fellow teammates. “I think we worked hard and did well.”