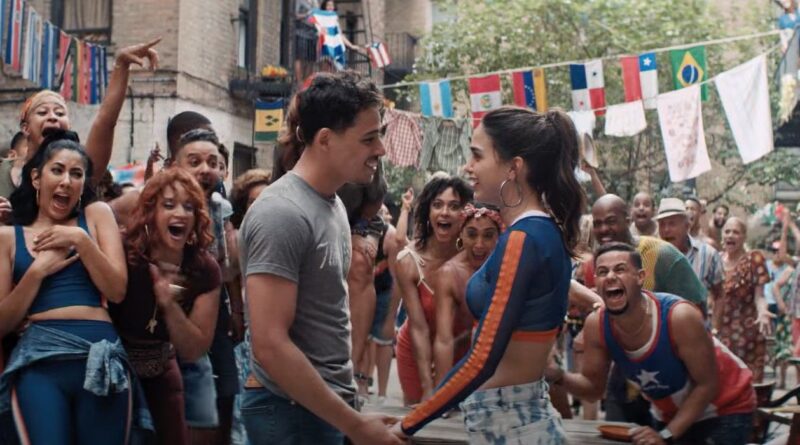 We, with a ⅔ clave rhythm edging into the air, enter the movement of morning hustle, of sun rising, of street vendors, of the unlocking the grate of bodegas, and of people bustling out of their homes into the streets of the Manhattan neighborhood, Washington Heights.

The first eight minutes of “In the Heights” offers dynamic cinematography and choreography, a chorus you can’t help but sing along to, and the hope that this movie-musical, which brings in themes of gentrification, social mobility, imposter syndrome, and immigration; written by and about Latinx people, would, in fact, be representative of that community living in the Heights.

Lin Manuel Miranda, who is of Puerto Rican and Dominican descent, adapted a book by Quiara Alegría Hudes to a Broadway musical in 2008. Critics considered it a success of Latin American story-telling.

However, the 2021 film has received feedback from viewers on the near-erasure of dark-skinned Black Latinx people in its casting; which, as critics argue, is insane considering how the real-life neighborhood of Washington Heights, also known as the Little Dominican Republic, has, according to a recent population survey, at least 90 percent of Dominicans of African descent. In other words, this neighborhood has a big Afro-Latino population, yet most of the principal actors in this film were light-skinned or white-passing Latinx people.

Why, in Blockbuster films with enormous budgets, in this case a $55 million budget, do we not cast dark-skinned people of color in our leading roles?

In the midst of this public discourse, Miranda wrote a tweet professing, “I started writing In The Heights because I didn’t feel seen. And over the past 20 years all I wanted was for us – ALL of us – to feel seen. I’m seeing the discussion around Afro-Latino representation in our film this weekend, and it is clear that many in our dark-skinned Afro-Latino community don’t feel sufficiently represented within it, particularly among the leading roles. I can hear the hurt and frustration over colorism, of feeling unseen in the feedback.”

Colorism within Hollywood and within communities of color is nothing new. The intention of “In the Heights” from its conception was to remedy the lack of Latino representation in this industry. This film’s main theme is the love one has for their community. It is present in every song, every interaction, through the punch of horn swells and ensemble voices, enough to fill the vastness of a New York city landscape, but also just enough to paint the intimacy of a quiet night where conversations are only in whisper. I think it’s incredible what films can create from its beginning to end, but if this film is grounded in community, it first needs to be representative of itself.