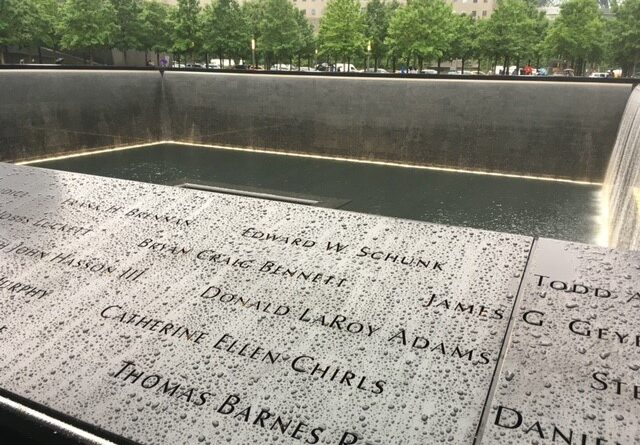 I remember looking out into the two large, heavenly flowing waterfalls that marked the place where the Twin Towers once stood; where thousands once lived. Rain fell that day at the Reflecting Pools, which was fitting, somber, and moving.

Visitors stood in silence looking over the thousands of names surrounding the pools. A small group of teenagers stood across from me, where the South Tower once stood. They laughed, smiled, and took selfies in front of the waterfall, in front of a mass gravesite. Their presence was much different than the crowd that surrounded them.

This month marks the 20th anniversary since those towers collapsed, and when a plane crashed into the Pentagon and another in a field in Shanksville, Pennsylvania. Thousands of lives were lost, from the innocent workers and travelers, to the heroic individuals who tried to save those innocents.

For me, 9/11 was always just a date in history, one I could never really feel the impact of. After all, I was born three years after Sep. 11, 2001. I didn’t live through this experience. I see history, a date of importance I know I should memorize.

But history is more complicated than a story. Its cast of characters are the human individuals who have complicated legacies. And I have always been interested in learning about these complicated lives.

Next to the waterfalls was a diagonally-shaped museum, where the remains of that day sat: the torn remnants of the antenna that was on top of the North Tower; a fire truck that went to save those trapped in the towers, smashed and destroyed; and a wall of different shades of blue images placed right next to each other with a quotation in the middle that said, “No day shall erase you from the memory of time.”

One of the museum’s rooms featured thousands of the simple faces of lives that were lost that day. They are of various ages, including smiling, innocent children. There was a little girl, no more than ten, who our tour guide said was going on a class field trip to Washington, D.C. She was of the highest academic achievement, Ivy League bound, someone who was going to, when the time came, make a mark on the world. But the airplane that she sat in flew into the Pentagon; her parents lost their beloved daughter, Harvard lost its high achieving student, and the world lost a great innovator. On Sept. 11, 2,996 great innovators were lost. Their faces filled the quiet room.

And that’s when it really hit me, when the event became more real: the attacks on Sept. 11 really happened. Two buildings really did once stand tall in the New York sky, and they really did fall; and people really did die, in the most tragic of ways. The story came to life.

I thought back to those teens taking selfies at the waterfalls; smiling, ignoring the reason why these waterfalls were there in the first place. Did they see the names below them, of the thousands of innovators lost?

Did they know what really happened on 9/11?