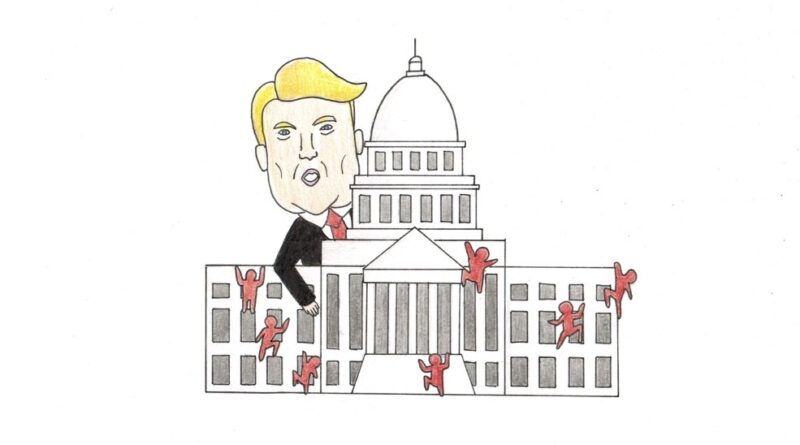 President Donald Trump’s dangerous rhetoric contributed greatly to the national shame which occurred on Jan. 6 when an angry mob of Trump supporters rioted in the Capitol. Trump is a danger to the public and, if left unchecked, will cause a disunion in the country that will surely rip our nation apart. Trump must be removed from office.

The rioters attacked the Capitol on the premise that the election results were fraudulent, a false belief Trump has spread through tweets, television and speeches for months. Trump called the public to show up and protest the results while the Congress was counting electoral votes. Soon after, the protestors became violent and forced their way through into Capitol Building, injuring police and destroying public property along the way. While rioters invaded the Capitol, Trump refused to call the National Guard, allowing the violence to continue for hours.

There are numerous reasons that we at The Olympian believe Trump should be removed from office. Trump’s rhetoric and position in power endanger the public. For months he has been spreading his propaganda causing the public to question our democracy by stating that our election was fraudulent. For far too long, he has preached unjust violence and bigotry and he continues to encourage his supporters to partake in such actions. Impeaching Trump would show his supporters that this man’s actions are unacceptable and in turn that theirs are too as well. By convicting him, Congress could deny him the ability to run again in the future. We have no idea what other morally wrong acts he has in mind but he should not be underestimated.

Although we want him out immediately, we also recognize that this may not be realistic. He has less than two weeks left in office and impeachments normally take months. Removing a president from office also requires a two-thirds vote of the Senate. Given how the impeachment went last year, this seems unlikely. We also fear that the threat of impeachment could anger him more and make the transition between presidents harder than it needs to be.

Trump’s supporters would argue that he should stay in office due to the fact that he has only days left to serve. With so little time, they believe that it would be foolish to try to impeach Trump and the effort would distract from the more pressing issues in the nation such as the pandemic and the economy.

However, we believe that these viewpoints are not valid. Any amount of time that Trump is able to stay in office is time that he can use to further harm the nation as an act of revenge for the “steal” that he believes occured. While it is possible that the impeachment will not succeed, if successful it will help prevent other dangerous people from gaining the presidency by setting a standard that is desperately needed in these trying times.