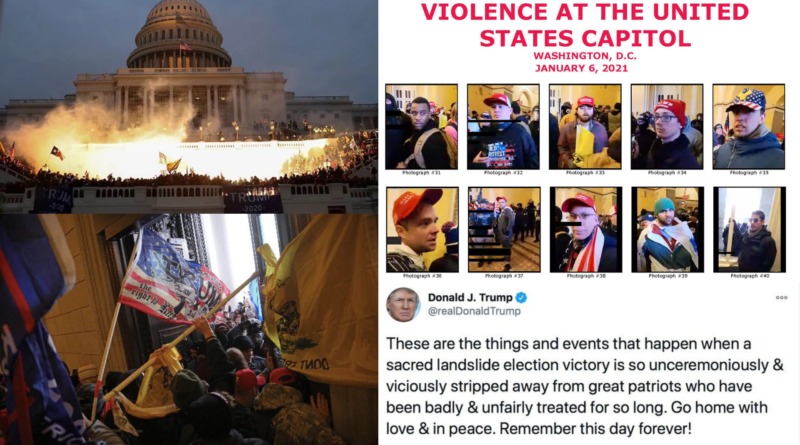 Trojans expressed horror and disgust at the rioters who attacked the Capitol Building on Jan. 6, and many blamed President Donald Trump for inciting them.

“He is responsible for inciting the violence on that specific day and for brainwashing his supporters into believing fabricated fascist lies. So yes, the terrorism at the Capitol is a direct result of Trump,” said senior Shane Tayag.

Pro-Trump rioters breached the Capitol Building and delayed Congress from certifying President-elect Joe Biden’s win. Lawmakers evacuated their chambers for safety as the mob stormed into the Senate and House chambers.

Earlier that day at a rally, Trump made unsupported claims that he won the election and his opponents used fraud to steal his victory, as he has falsely insisted for months. He encouraged thousands of supporters to walk to the Capitol, “show strength” and “cheer on” the Congress members challenging Biden’s win.

Five people died as a result of the riot that erupted. Police shot and killed one woman. Three others died from other causes which are so far unrevealed. One police officer sustained fatal injuries, and dozens of other police officers and rioters were hurt.

“You have to go home now. We don’t want anyone hurt,” Trump said on a video posted on Twitter as his supporters engulfed the Capitol. However, his message failed to disperse the mob.

The mayor of Washington issued a curfew of 6 p.m. Congress finished the certification process early the next morning.

“Of course, the fault of this event rests entirely on Trump and other just as cowardly Congress members who have encouraged this kind of behavior,” said junior Brooke Kasl-Godley. “However, it’s so obvious that the systems in this country that prioritize and support white power, like the police, allowed the attempted coup to happen. That’s what truly infuriates me. I think we need to overhaul these systems as well as remove every guity elected official if we really want to recover.”

Caistor expressed a similar view. “The events of Jan. 6 were, to put it lightly, a horrific and yet not very surprising confirmation of what we all already knew- America’s government, law enforcement and citizens actively and unapologetically uphold the white supremacist agenda. We’ve witnessed time and time again that the aforementioned group of people will fight tooth and nail to preserve the racist ideals that have plagued our country since it was ‘discovered.’”

House Speaker Nancy Pelosi threatens a second impeachment against Trump if his cabinet does not invoke the 25th Amendment to strip him of power. His term ends on Jan. 20 though fallout from the riot may last far beyond that.

“It will take a long time for the rest of the world to look at us the way that they used to: a place where the transition of power is smooth,” said senior Kameela Newell. “If there is a chance that the country can heal after this, it’s not during the Trump administration. Biden or a president after him may be able to heal the country, but I believe that the rest of the world will never forget this and won’t look at us the same.”