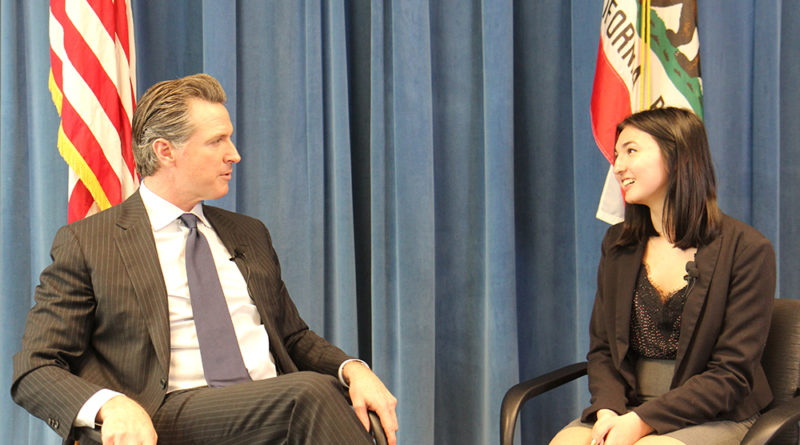 Our journalism class conducts an annual trip to Sacramento for the CNPA conference in addition to a couple of meetings at the Capitol. I was beyond ecstatic to learn that on top of meeting a couple of senators, I would also get to interview Governor Gavin Newsom. Our journalism teacher was smart enough to get him to pledge (on camera) that he would let us interview him once he was elected. I’d never met a fully-fledged politician before; I had no idea just how socially advanced they needed to be.

I’d heard stories of his major accomplishments: bringing the issue of marriage inequality to federal light, massively increasing California’s education budgets, and divorcing Fox News’ star reporter and avid Republican Kimberley Guilfoyle. My parents were even more excited than I was; my mom made me spend seven hours at Nordstrom Rack in order to find the perfect interview outfit.

Naturally, I was nervous. My heart was pounding up until the office door swung open and Newsom casually said, “Hey guys, how’s it going?” His charisma was truly impressive; he was so fabulously nonchalant that I forgot how high-ranking he is. My co-editor in chief, Derek, even got him to laugh a couple times. It was clear that being interviewed by high schoolers was refreshing for him; we obviously weren’t going to defame him. Surprisingly, I maintained my confidence throughout the interview. Admittedly, I’m really proud of myself for accomplishing as miniscule as reading questions off of cue cards.

After the interview, he took us on a tour of his offices, something he labeled as “breaking the rules.” We met his wife and a majority of his staff, about which he (jokingly) said, “I have no idea what they do.”

The interview was unfortunately close to the democaratic primaries. After seeing with my own eyes how important charisma is to political success. I think approachability and personality are super important to good leadership skills, and none of the Democratic candidates have a solid combination of the traits. I wish that Newsom would run, but when we asked him he gave us a total of six “No!”s.