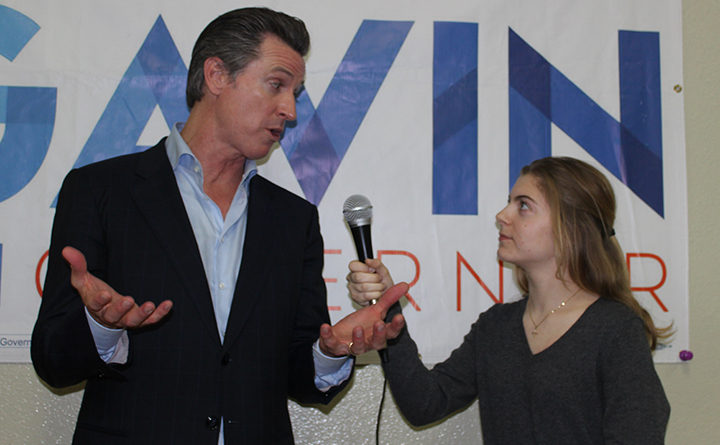 Myself and members  of The Olympian made our way to a meet and greet with Lt. Governor Gavin Newsom in hopes of meeting him after years of requesting for an interview. We had expected a huge turnout, a stadium of reporters and supporters standing around to see the well known former mayor of San Francisco and very possible future governor of California. However, when we arrived at the venue, a small amount of chairs and people were present.

It was then that I realized how possible having to interview Newsom became. I had personally never interviewed on camera before, but was more than excited for the opportunity. He came out after a short introduction and shook hands with the audience.

He began right away, addressing his top issues and successes from his previous experiences in office. Newsom spoke about making universal preschool “happen overnight” and promising the first two years of community college free. He was not shy of his work and spoke about being at the forefront of legalizing gay marriage and drafting the legislation for the legalization of marijuana.

He then allowed questions from the audience, where hands shot up. As soon as each question was asked, Newsom answered each very cleanly, however dodging many of the sensitive parts of each topic. I understand most politicians approach questions this way, yet it came across to be ingenuine at times.

Newsom was the most polished person I’ve met. He never stumbled on a word during our interview and his demeanor was extremely confident no matter the question. It was both intimidating yet reassuring knowing we have such an assertive candidate running for governor and possibly leading our state into the next generation.

It was an honor to meet Newsom, let alone interview him. As the front-runner for governor so far in the race, I have high hopes and expectations for him and what he can accomplish. Whether he becomes governor or not, I am happy to have met someone who has greatly impacted California and continues to envision our success in the future.