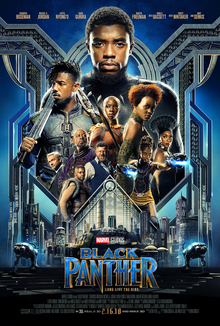 “Black Panther” is a spectacle. With its embedded African culture, breathtaking colors, and perfectly orchestrated fight scenes, it’s one of Marvel’s best movies by far. But the biggest message of the story? Wakanda, the fictional home of T’challa (Black Panther), is a vision of what Africa could have looked like had it not suffered from imperialism.

To outsiders, Wakanda is merely a third-world country that has chosen to isolate itself from foreign affairs. However, behind the cloaking device, the nation colorfully sprawls across a beautiful landscape in the form of technologically-advanced buildings and traditional architecture. As it turns out, Wakanda is perhaps the nation superior in technology. Its mines are rich with the fictional material Vibranium, the strongest metal in the Marvel universe.

The advancements of Wakanda are completely hidden to the world. This is the conflict that T’challa must face once he becomes king as a result of the events of “Captain America: Civil War.” Is it his responsibility to share these resources to the rest of the world, to suffering black communities in America, to other African nations affected by imperialism?

The villain Killmonger certainly seems to think so. He dreams of using Wakanda’s resources–and weapons–to arm oppressed African descendants everywhere to allow them to usurp their governments. T’challa’s vision of a peaceful country clashes with Killmonger’s militancy. Naturally, a compromise evolves by the end of the film.

“Black Panther” gives widespread representation for black men and women. There are only two notable white characters in the story, and the royal family of Wakanda is protected by an all-female army called the Dora Milaje. Additionally, T’challa is frequently accompanied on-screen by three inspiring women: Nakia, a spy with charitable intentions, Okoye, the loyal leader of the Dora Milaje, and Shuri, his genius younger sister. This representation of black females is profoundly important. It proves that female-led superhero movies can be done successfully.

Shuri was by far my favorite character. With perfectly-timed one-liners like “Great, another broken white boy for us to fix,” and “Don’t scare me like that, colonizer!” she steals nearly every scene she’s in. Her intelligence rivals that of Tony Stark, but she is only a teenager. Her creations like remotely driven automobiles and kinetic energy-absorbing super suits pry her from the mold of the typical Disney princess.

“Black Panther” has allowed people of color to infiltrate the mainstream media. Director Ryan Coogler pays homage to his hometown of Oakland, which is unsurprising considering his work on Fruitvale Station and the origins of the Black Panther Party. Killmonger is a villain that the audience can sympathize with to an extent. T’challa, Nakia, Okoye, and Shuri are all tastefully developed. Coogler has done a truly amazing job with his latest adaptation. Black Panther sets a wholesome example of the representation that is so duly needed in cinema, all while curating a captivating, emotional, and action-packed story.

One thought on “Black Panther is revolutionary”