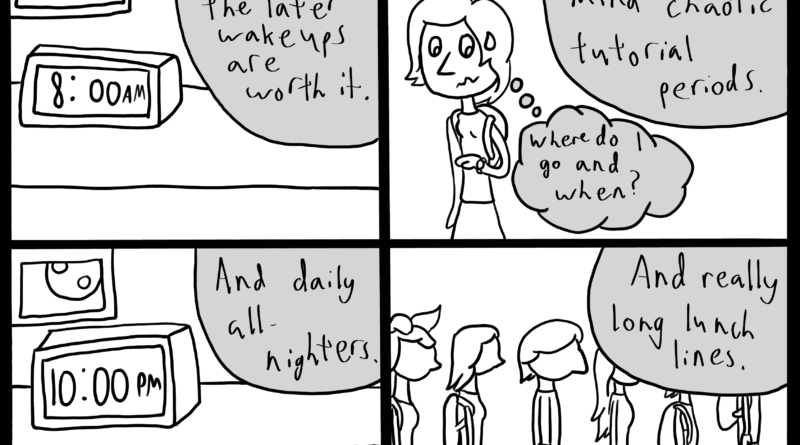 Starting next September, the school district intends to change the high school schedule.  These changes include a later start time and consequental later release, longer passing periods, combined lunch, and a Response To Intervention (RTI), otherwise known as tutorial, period twice a week.

We at The Olympian mostly like the proposals since a later start means students can sleep in more, which has been proven to help with focus and alertness in school.  This could improve student performance in many areas, and students wouldn’t fall asleep in class as often. In addition, the study hall could help students with homework load, and tutorial periods could allow students to get extra help on subjects they might be struggling with, another factor that could improve student performance during school.  Our school would also be on a more similar schedule to that of other schools.  Later starting times would also mean that during the winter months, zero peiod students wouldn’t have to come to school while its dark out.

However, we are concerned about how the change of schedule would change things for extracurricular activities like sports and clubs. They would have to meet later and end later, meaning later nights of homework for many students. Student athletes would also miss more class time when they get excused early to go to events. In addition, many parents take their kids to school on their way to work. If the schedule changes, many students would have to find another way to get to school if their parents are not able to take them at the new time. The schedule change would also include combined lunch, leading to a more crowded campus at lunch. Upperclassmen and freshmen alike would likely object.

Our staff is also concerned that the tutorial period could be unproductive and turn into a waste of time if students don’t take it seriously.  We hope that this can be prevented by making meaningful tutorial activities so that students will take it more seriously.  This could be done by giving a variety of options to students that could be interested in different things so that they aren’t bored and the period doesn’t become a waste of time.

We at the Olympian believe that the schedule change is a good idea because there would be many benefits to starting school later, and having tutorial periods twice a week.