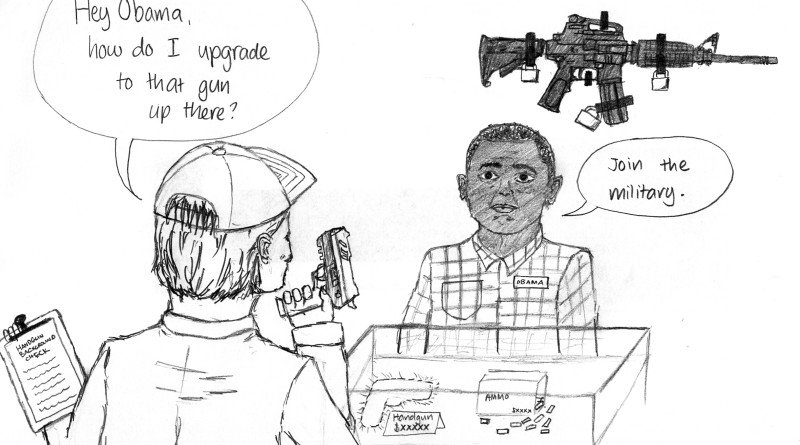 In 2015 alone, there were nearly 300 mass shootings in the United States. With so many people killed or injured throughout the year due to these shootings, it has raised extreme awareness on gun rights and gun possession.

In response to the increase of mass shootings, President Barack Obama issued an executive order on additional restrictions for gun purchases. The executive action will expand the background check system to reduce guns from being in the hands of criminals. The improvements on background checks will allow for more effective ways to reduce the amount of assaults and shootings in the U.S..

Many people support the new gun control orders. Others do not. We at The Olympian believe that more background checks are a good first step to dealing with gun violence. As students who are well informed about the dangers in lack of gun control, we believe that in order to ensure the safety of communities, we need to reduce the risk of guns being possessed by people illegally. We believe that Obama’s executive order is a move in the right direction.

Gun show loopholes and undocumented gun sale transactions are a very popular way for guns to be purchased. Dealers at gun shows and private sales commonly sell weapons to people who may or may not be allowed to receive them. Obama wishes to close the “gun show loophole,” and prevent unlicensed dealers to sell to felons, mentally ill people, and  people convicted of domestic violence.

The executive act does not confiscate guns or stop people from buying them legally, it only tightens the laws to prevent the wrong people from having them. That is why The Olympian supports Obama’s act. It is not hurting those who are strong believers in the Second Amendment, but it is a step towards fewer casualties in the nation. Some of us would even support additional measures on gun control.

All of us at The Olympian agree that background checks would help, and not infringe on rights of law-abiding gun owners. We anticipate that it has the potential to stop major gun violence and advance to a safer environment for everyone.