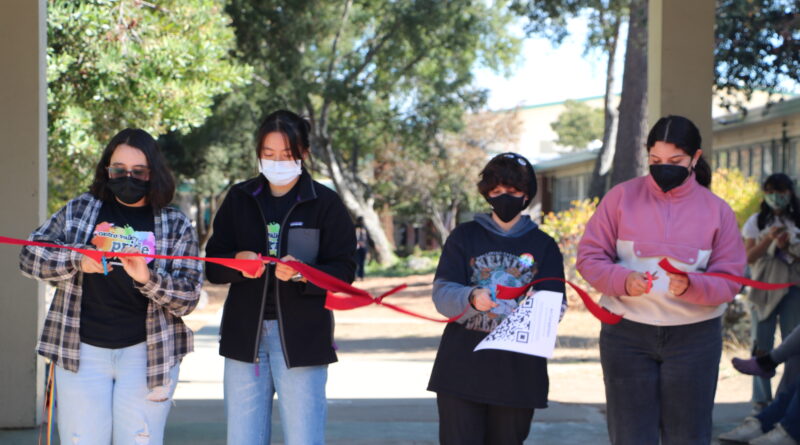 The new rainbow murals on CVHS’s campus are more than beautiful pieces of art. On Oct. 27, students, teachers, and staff gathered in front of the library to watch the ribbon-cutting ceremony of the progress pride flag mural aimed to uplift the LGBTQ+ community at CVHS. Yet, this mural is just one of many painted across all CVUSD campuses.

These Rainbow Pathways were an initiative spearheaded by seniors Karissa Chu and Rebecca Ireland in June of 2021. They raised $3000 through GoFundMe and eventually garnered enough traction to become approved by the CVUSD Board of Education as an official district-wide project in Feb. 2022.

“Not only did we hope the paintings would act as a sign of support and welcome to LGBTQ+ students,” Chu said in her speech with Ireland, “but also serve as a reminder to the greater school community that LGBTQ+ students exist and are a part of the school like any other group of people.”

In the wake of the recent wave of anti-LGBTQ+ legislation introducing bills such as the federal “Don’t Say Gay” bill, which, according to National Public Radio (NPR), “lumps together topics of sexual orientation and gender identity, with sexual content such as pornography and stripping.” That, in addition to the “adverse experiences LGBTQ+ people face in day-to-day life,” as Chu said, the murals pose a potent message to the CVUSD and community: students “belong on the campus as their whole selves.”

Despite facing opposition to the murals from a protest organized by the group Bay Area Against Mandates during the Sep. 14 CVUSD school board meeting, Chu, Ireland, and the school board stood their ground and carried out the project.

Superintendent Parvin Ahmadi spoke on the importance of the project: “As Dr. King says, ‘Sometimes things that you do are not either popular or accepted. But your conscience tells you you have to do what’s right.’ We did what’s right. This is right. You can always do what’s right. There is never a time where you cannot do what’s right. So thank you again, Rebecca. Karissa, this, all of you, all of the students here and our team, our board, our community for supporting this.”

Chu and Ireland still believe that the work is not over yet.

“Not only do we want students and families to see that they are welcome on campus, we want them to see themselves in curriculum, staffing, clubs, activities, and more. This is proven to make a huge impact on LGBTQ+ students’ esteem,” Ireland said. “The rainbow murals are installed on campuses, books with more representation are being introduced in classrooms, staff is being more educated on LGBTQ+ topics, pride flags are raised every June, and staff is working with Karissa and me — queer students who want to make other LGBTQ+ students feel more accepted and safe on campus.”

Through their efforts, Chu and Ireland have supported the Wellness Center in launching a workgroup, facilitated by District Behavioral Health Coordinator Marian Meadows which began February 2022, for any students and staff throughout the district interested in becoming involved with more projects to create actionable ideas for “a more inclusive and just curriculum with better representation” of the LGBTQ+ community.

“We’re also creating an audio tour to highlight different locations, programs and things happening at school, and history [of] the LGBTQ+ community,” Chu said. The tour topics and locations include the gender-neutral bathrooms to speak on the history of gender segregation in bathrooms, the football field to talk about trans students in sports, the Wellness Center to voice the issues of LGBTQ+ mental health, and the library to highlight LGBTQ+ representation in media. The tour will be available in December for all CVUSD students to listen to and watch. More information will be available shortly.

“While we feel that more progress can always be made in the inclusivity and representation of the countless marginalized groups in Castro Valley and the United States, Chu said, “we are glad the LGBTQ community is not only being acknowledged, but celebrated on Castro Valley school campuses.”

Ahmadi agrees. “Equality isn’t just about passing laws as you know,” she said. “You have to really get to the struggle that is in the hearts and minds of people.”