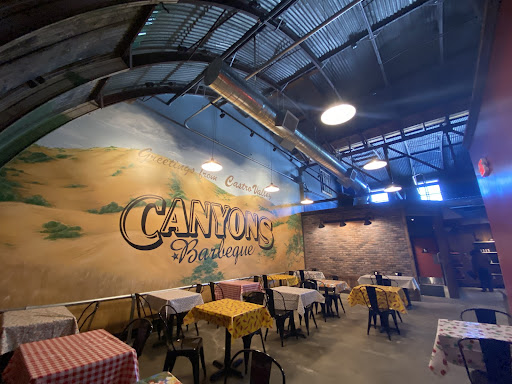 Out with the old and in with the new: that’s what usually happens when a new business takes over an old building. But thanks to Ken Carbone and his vision for the future of Castro Valley, a former gas station and car dealership now hosts a brand new family-owned barbecue joint called Canyons BBQ, with two more separate stores still in the making. On the corner of Castro Valley Boulevard and Wilbeam Avenue, the old building is finally being restored to its former glory.

As one of the only barbecue restaurants in Castro Valley, Canyons has indoor-outdoor seating, takeout, catering, and opportunities for fundraising. The menu features various types of meats like tri-tip, brisket, pork ribs, pulled pork, smoked chicken, and hot links. Canyons also offers a rewards program, where your purchases earn points that can be put towards special deals or future purchases.

The owner of Canyons, Larry Ingram, is no stranger to the barbecue business. With other establishments scattered around the Bay Area, Canyons stands out with its custom-built space explicitly tailored with the restaurant in mind.

Ingram wanted the restaurant to relate to its location when deciding on a name. Canyons stood out the most due to Castro Valley’s abundance of this particular geographic feature.

Ingram originally got into the barbecue business through his son. The barbecue place his son worked at in high school was nothing more than a hole in the wall, and when the owners decided to sell the business, he suggested they buy it and turn it around.

“I’ve really grown fond of the community and we really have a special place here,” said Ingram. “I mean, there are [other] cities around, but they’re not quite like Castro Valley… we’re really happy to be here and we hope to be good community members.”

Carbone, with the help of others, acquired the funds to restore the building as part of their effort to foster a newer and better Castro Valley. They have worked to restore and renovate multiple old buildings along Castro Valley Boulevard and hand-selected the businesses that will go in them in order for them to “work together and create a synergy and this [nice] walkable downtown.”

The original building was constructed to house a gas station and the first car dealership in Castro Valley. Throughout the years, it has cycled through various businesses, including a laundromat, smoke shop, hair salon, and even a fish and chips joint, before it was finally left vacant for a period of time. Now restored, the building houses the Canyons barbecue restaurant, with space for two other up-and-coming businesses.

As they start to go into business, Canyons is hiring more employees, specifically looking for local high school and college students. “We have the ambition of making this a great place to work…  hopefully it’s the first job for some of these folks, and it’ll be a memorable one that they’ll look back on,” said Ingram.