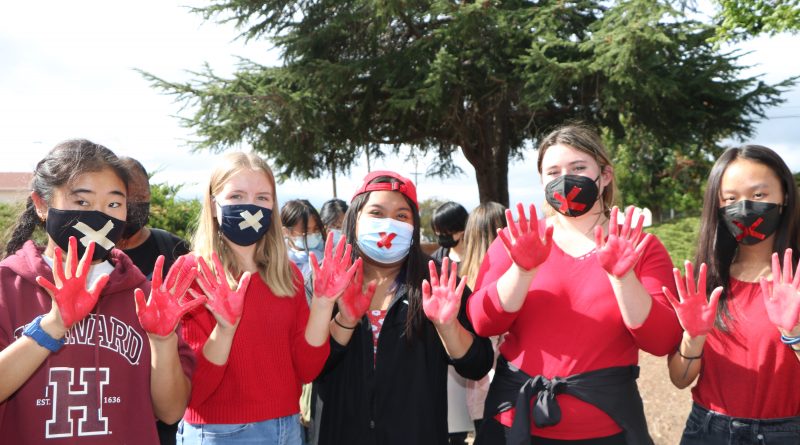 More than 100 students dressed in bright red and teal marched through the CVHS campus in support of survivors of sexual assault on Oct. 21. The marchers hope to spark action on the issue by both students and school staff.

The Women of Color for Change Club organized the demonstration.

“We initially organized this protest after Trojan Time in the beginning of our school year,” said club member Bibiana Lazares. “Admin had said nothing about the actual rules of the dress code only, ‘Please do not intentionally dress to provoke others.’ From there we really opened a discussion on how that kind of language promotes victim blaming and how unsafe people really feel at school knowing their reports might be swept under the rug.”

The group posted these demands:

“1. We want CVHS Admin to prioritize our safety as students and take our reports seriously.

2. We want CVHS Admin to acknowledge the seriousness of sexual assault and take action when reports are received.

3. We want CVHS Admin to make better efforts at explaining and enforcing the ‘Zero-Tolerance Policy.’

4. We want CVHS students to completely understand the Zero-Tolerance Policy for Sexual Assault and understand how serious it is.”

CVHS Principal Blaine Torpey responded to the event with this statement: “We take sexual assaults very seriously. Our most important responsibility is to protect students and ensure that they are safe and feel safe. There are strict procedures and steps required under federal and state law that we must follow when it comes to any allegations of sexual misconduct.”

The CVHS student handbook prohibits sexual assault and notes a five-day suspension, police report and expulsion recommendation as consequences. There is not, however, any mention of a “Zero-Tolerance Policy.”

“It’s pretty well known amongst the student body that there have been some recent sexual assault instances and many people, including the victims, felt as though it was not being dealt with or did not feel supported by the administration as well as a good amount of their peers,” said the Women of Color for Change Club’s President Aiana Pillay.

Lazares agrees. “No one deserves to feel unsafe at school,” she said. “I know the sinking feeling in your stomach and the nauseating memories that you have to relive when you see your abuser.”

Demonstrators remember how spectators had acted at the protest.

“During the demonstration, I was surprised that some students were making fun of the ones that were protesting, and many people don’t take this issue as seriously as they should,”  said participant Sofia Palau.

Lazares recalls a moment she circles back to: “I remember walking through the basketball courts and hearing someone say, ‘Why is it only women?’ I know they were clearly trying to make fun of us, but I think about that a lot. I feel like it says a lot about the conversation surrounding sexual assault and rape culture at CVHS. It is uncomfortable and hard to acknowledge that most victims of sexual assault are women, but I know there are more male victims than we think.”

Brady Hogan, one of the few boys participating, explained why he felt it was necessary to be part of this protest. “At the end of the day we’re all human,” Hogan said. “[Sexual assault] is a problem everyone should be concerned about, so everyone should fight against it, no matter their gender.”

Although the event criticized CVHS administration, Torpey expressed support for the protestors and their goals.

“The organizers and participants demonstrated the power of students setting the expectations for all of us. Students reinforced how important the topic of sexual assault is. It was moving and impactful. Students showed how to respectfully share their concerns about a very important issue,” Torpey said.

Lazares remembers a particular moment she had after the event: “After the protest, I was worried about what people would say. It’s hard being front and center, organizing, planning, and ultimately leading the crowd of people before us. I was worried, but someone stopped me on my way to math class. She told me she was a victim herself and how much it meant to her. In that moment, it all became real. I didn’t care after that, people could say what they wanted to. If we helped one person feel more safe and supported, then it all was worth it.”