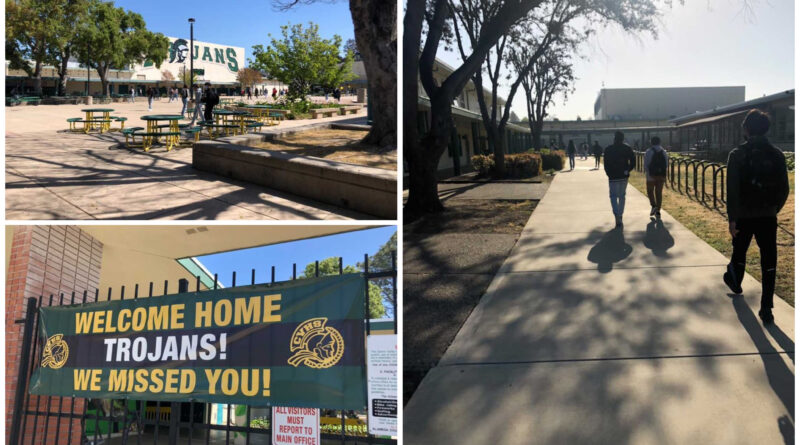 Many schools in California are opening up to hybrid models and CVHS is no different. The new hybrid schedule and format began districtwide the week of April 12. The new format has brought benefits as well as new challenges, as 35 staff members and 29 students have tested positive for COVID in the school district since July 1, 2020, forcing dozens of people to quarantine.

“If people had exposure in the last 14 days or show symptoms, they have to stay away from our school,” said Assistant Principal Kevin Baker.

Most on campus classes at CVHS average around eight to ten students so they are not overcrowded.

“Hybrid is going pretty well because there’s a lot less people on campus, maybe about a fourth of the whole school,” said teacher Kelley O’Hern.

Fewer people is a necessity; because of COVID-19, schools can’t be crowded because it would pose a higher risk to everyone at that location. Out of all the district schools, CVHS has the lowest percentage of students going back in person while the elementary and middle schools have higher percentages.

“It’s good for kids who need human contact and to see other people than the people in their household to get out of the house,” said teacher Kevin Batchelor.

While hybrid has its advantages, it also has its disadvantages. Teachers find it difficult to navigate both a classroom of students as well as students at home on zoom; it’s hard to make class engaging and worthwhile for both parties.

“There isn’t really anything to improve, the only drawback is that it’s hard to do ten kids in person and 20 on Zoom and make it work for both groups,” said Batchelor.

While only about a fourth of the school is on campus, navigating the school is now different; there are arrows to follow and everyone has a specific gate they need to enter and exit from.

“I feel like the gate system is weird because it’s inconvenient for a lot of people, plus I find it kinda weird how the gate system was made to make it so people aren’t crowding at gates but then the health screener check clogs them and we all have to stand in a crowd at the gate every morning,” said junior Alaina Retodo.

The gate system was made to reduce contact but contrary to the plans, there is still a lot of contact between students waiting in line at them, Retodo said.

The district offers testing for staff and students, which has caught a few cases early thus lowering everyone’s risk as those infected have quarantined and stayed off-campus.

“When someone tests positive it is reported to the nurse who will report it to the district. It is then reported to the principal of the school and the student or staff member along with their cohort is sent to quarantine for two weeks,” said union president Mark Mladinich.

CVHS is taking as much precaution as possible and following the county guidelines. School officials hope that the abiding by health guidelines during hybrid instruction and the ongoing vaccination effort will allow campuses to more fully reopen in the fall.