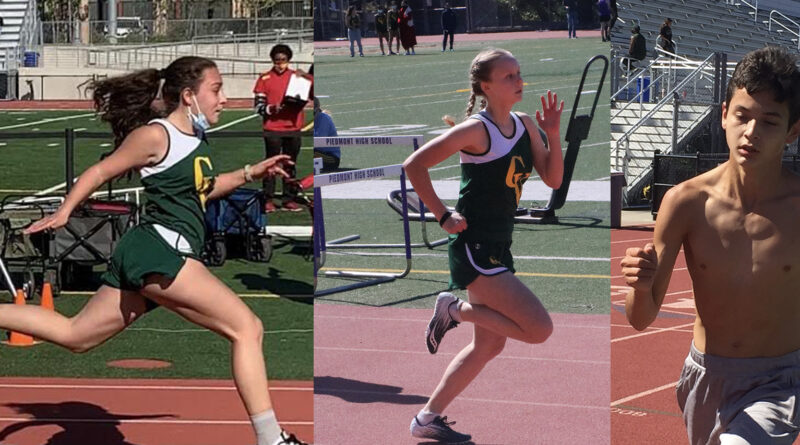 Freshman track stars Roy McNabb, Delaney Rasmussen and Marissa Meza won first place in each of their respective events during their last junior varsity meet.  The WACC Novice Invitational took place on April 13 at Witter Stadium in Piedmont. Although the season was short, they all strived and succeeded through their practices and meets.

Distance runner McNabb won first place in the 1,600 and 800 meter races, as well as getting third place in the 3,200 meters, improving his personal records from eighth grade. McNabb claimed that the most exciting things about this season were the big regional meets.

Middle distance runner Rasmussen won the 400, 800 and the 4×400 relay with her teammates. She thought track was very enjoyable this season, despite the tight schedule and shortened practice time. Rasmussen claimed that the most exciting thing this season was seeing her times go down as her practice paid off.

“There’s a lot of times that I’ve told my coach I want to achieve by next year. For example, I want to beat the school record. My goal is to break one minute for the 400 meters,” said Rasmussen.

Sprinter Meza won the 100, 200 and the 4×400 team relay race. The personal records she achieved were in her 100 and 200 meter races from eighth grade. The most enjoyable thing for her this season was moving up to the varsity team and attending the invitational meets. Although she felt the season was relatively short, she thought it was nice to finally have coaches instead of just parent volunteers.

“For my goal next year, I want to get down to 12 seconds for the 100, through intense training,” said Meza.

Along with their junior varsity victories, all three freshmen are also part of the varsity team. Being the youngest ones, they felt it was a bit intimidating. However, they enjoy the competition and being on the team helps them strive for their goals in order to meet their coaches and their own expectations.