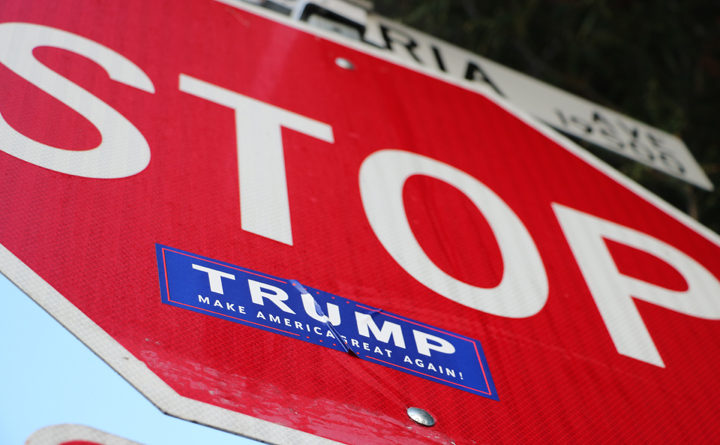 Alarmed by Donald Trump’s victory in the presidential race, CVHS students passed around a petition which asked the school district to refrain from sharing the immigration status of any student. They received 721 signatures in a day and then presented the petition to the school board just two days after the election.

School board members and Superindent Parvin Ahmadi were stunned but listened sympathetically and supportively.

“They didn’t realize this was an issue and that people were worrying about it,” said sophomore Ria Panjwani. “(Ahmadi) said she would get out the information that the school district is not allowed to release information about immigration status on any family. I felt like they l listened to us.”

Throughout Trump’s campaign, the Republican promised bold changes on topics like education, the environment, health care, taxes, the Supreme Court and immigration. Trump has promised the American people action to “make America great again,” though many CVHS students and staff members expressed opposition to his ideas.

Here are some details of his plans for his first 100 days as president.

Trump has been an avid and outspoken opponent of government control over education. According to the Trump campaign, public schools are a “failed government monopoly,” and competition caused by school choice will better the nation’s education system.

Trump also wants to eliminate Common Core standards that many states like  California have adopted. In addition to these changes, the president-elect also wants to reduce the power the government has over education.

Trump expects states to contribute $110 billion to provide school choice and voucher programs for children living in poverty, whom he believes the public schools are failing. He also plans on immediately investing an additional $20 billion of federal funds into this plan.

Voucher programs allow parents to use tax money to pay for their children’s non-public school education, but Democrats and public school teachers traditionally oppose them.

In Trump’s first 100 days, he plans to nullify every executive action issued by President Obama, including orders to increase gas mileage and requiring power plants to reduce air pollution. Trump also wants to lift limitations put in place by former Presidents Clinton and Obama in order to allow energy infrastructure projects like the Keystone Pipeline to move forward.

Trump then plans to cancel billions in payments to U.N. climate change programs, and in turn, use that money to fix America’s water and environmental infrastructure.

Many see Trump’s plans for and opinions on the environment as alarming.

“His plans to promote mining and burning of fossil fuels, to try to dismantle the EPA, to not hold the US to its promises in the Paris Agreement; these are all unconscionable. Nothing worries me more about the new administration more than this,” said chemistry teacher Deborah Yager.

“I’m really afraid that we’ll be moving backwards as a country on many fronts, but environmentally being one of them especially,” said Laura O’Brien, science teacher.

Trump’s overall health care goal is to “broaden health care access, make health care more affordable and improve the quality of the care available to all Americans.” He plans to repeal the Affordable Care Act immediately, with the reasoning that no one should be mandated to buy health insurance, and appears to have more than enough  Republican support in Congress to do so.

Instead, Trump wants to allow health insurance to be sold across state lines, which he says would create more competition in the industry and lower rates.

“I would hope that our elected officials don’t pull the plug [on Obamacare] until they have a real plan and can take care of all the people that are currently covered under Obamacare,” commented anatomy and physiology teacher Melissa Kindelspire.

Trumps also plans to require price transparency from health care providers. In terms of pharmaceuticals, he would like to allow more drug providers to be able to provide medication, including overseas companies. Lastly, he wants to allow state governments more autonomy with Medicaid policies, deregulating its current federal structure.

While Trump has proposed major tax cuts that fall within the typical Republican economic agenda, his rhetoric against free trade goes against traditional Republican support for this. Additionally, his plan offers little assurance that the national debt would not increase under these tax cuts.

The Middle Class Tax Relief and Simplification Act would cut taxes on all levels, with the largest cut of 35 percent going to the middle-class. Trump also intends to lower the business rate from 35 percent to 13 percent, and his proposed three-bracket “simplification” also greatly cuts taxes on the very wealthy.

“I’m really curious as to whether he’s actually going to be able to enact this stuff, but the amount that he wants to cut definitely scares me. I don’t see how his tax plans really promote the purchasing power of the masses,” said economics teacher David Roth-Rossi.

Alongside these changes, Trump hopes to disrupt trade deals like NAFTA, claiming that they take work away from U.S. citizens. This unusual take on free trade may have persuaded what Roth-Rossi described as the “rust belt, and maybe even parts of the South” to support him.

Trump offers few solutions to avoid increasing the national debt of $19 trillion. While his tax plans line up with traditional conservatism, Trump’s proposed spending on infrastructure and the military could face opposition from fiscally conservative Republicans in Congress.

Trump released a list of 21 potential nominees to fill the Supreme Court’s current vacancy. If one of Trump’s nominees succeeds the late Justice Antonin Scalia, Republican nominees will again control the court.  During his presidential campaign, Trump expressed his desire to appoint a conservative judge in Scalia’s place.

“For a Supreme Court nominee, you want a legal and constitutional scholar. It’s not about being liberal or conservative,” said social studies teacher Gerry Cox.

The moderate and liberal judges on the court are getting older: Anthony Kennedy is 80, Ruth Bader Ginsburg is 83, and Stephen Breyer is 78. Should Trump appoint a replacement for any of those three, conservatives will cement their hold on the court.

“The major concern is that he will nominate pople who are unqualified, who just agree with him ideologically,” said Cox. “He’s unpredictable.”

Crucial, irreversible decisions will be made in the coming years, not just by the  Supreme Court but by all federal courts.

During his campaign, Trump was extremely vocal about his plan for immigration: build a wall, send them home. But now that Trump is actually the president, what is the future for the immigrants of America?

Trump’s “Contract With the American Voter” promises a halt in immigration from “terror-prone” regions, deportation of more than two million people who are criminal illegal immigrants, funding cuts for sanctuary cities, and most famously, construction of a wall.

At CVHS, as well as all over the country, even legal immigrants are scared, not just for their status in America, but for the acceptance of their culture or religion.

“I’m thinking about taking off my scarf because I’m Muslim. I’m scared of people’s reaction,” said senior Sara Abdulqaui, an immigrant from Yemen.

Abdulqaui and her family have lived in the United States for three years. Despite her family’s legal status, she is fearful.

“We are scared he’s going to kick us out,” said Abdulqaui.

Trump will take the oath of office on Jan. 20, in front of an inaugural crowd that will include a CVHS Close-Up group, and then the nation will see how far he can advance his agenda.

One thought on “Trojans brace for Trump agenda”