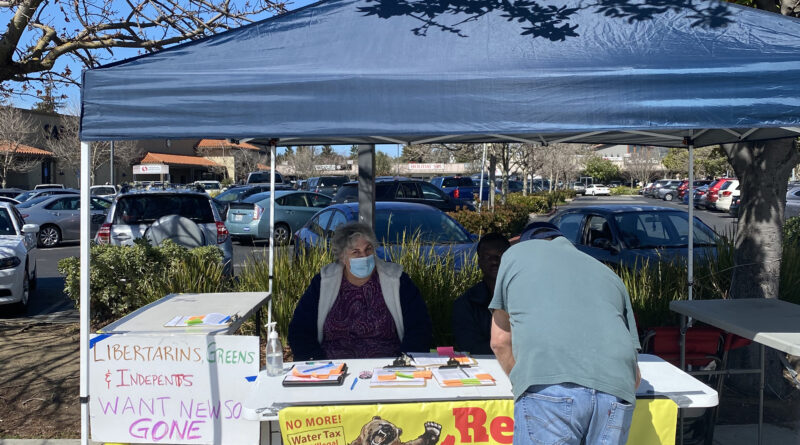 A dedicated group of Castro Valley residents up until March 17 set up shop at the corner of Castro Valley Boulevard and Redwood Road to collect signatures for the recall of Governor Gavin Newsom.

Castro Valley resident Elizabeth Stump who like other volunteers has spent many weekends at Free Speech Corner, the intersection of Castro Valley Boulevard and Redwood Road, has stated that each weekend they receive 50 to 100 signatures.

Recall supporters argue that Newsom mishandled the state’s response to the coronavirus pandemic and engaged in hypocritical actions like eating out of a Napa Valley restaurant, French Laundry, during a peak of COVID-19 cases in California.

“The way he has mismanaged the budget and spent money and signed laws that are just authoritarian. Plus with COVID-19 he let big box stores open, yet small businesses weren’t able to remain open,” said Stump, who is also vice-chair of the Libertarian Party of Alameda County.

The effort to recall Newsom was launched on June 10, 2020, and now organizers say 2.1 million signatures have been turned in with the submission deadline of March 17, 2021, passed. The California Secretary of State is in the process of verifying those signatures.

A recall election would provide voters with two questions. The first would ask whether Newsom should be recalled from the office of governor. The second would ask who should succeed Newsom if he is recalled. A majority vote is required on the first question for the governor to be recalled. The candidate with the most votes on the second question would win the election, no majority required.

Since 1911, there have been 55 attempts to recall a sitting California governor. The only successful recall election was in 2003, when voters recalled then-Governor Gray Davis (D). Then 135 candidates ran in the recall and the winner, Arnold Schwarzenegger (R), received just under 50 percent of the vote.

“I think the money could be better spent, like on homelessness and supporting those folks that have been adversely affected the coronavirus, and there are still folks in our community that are unemployed that need assistance and it seems like an unfortunate diversion to get relief for those real problems,” said Mark Mladinich, president of Castro Valley Teachers Association,  when speaking on the cost the recall effort would affect the state of California.